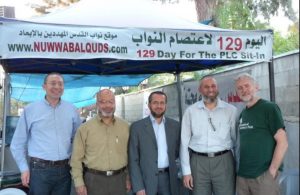 Jeremy Corbyn visited Israel and the West Bank in November 2010 with an Islamist lobby group to meet senior Hamas officials, and failed to declare the funding for the trip in violation of parliamentary rules, i24NEWS can reveal.

The Labour leader, then a backbencher, made the trip from 5-9 November 2010 as part of a delegation with Islamist lobby group Middle East Monitor (MEMO) and met two groups of Hamas parliamentarians.

But there is no record of Corbyn’s visit to Israel in the British Parliament’s Register of Members’ Financial Interests, even though a colleague on the trip declared that it cost above the threshold required for MPs to report gifts.

Rules at the time required MPs to declare any gifts above £660 ($840). Corbyn’s fellow Labour MP Andrew Slaughter declared the total cost of flights and accommodation for the same trip as £927, which he said was paid for by Friends of Al-Aqsa and Middle East Monitor.

MEMO has since deleted evidence of Corbyn’s visit from the internet, but i24NEWS obtained its original report. The document refers to Israel as “the Zionist state” and accuses it of “apartheid”, charging it with performing “ethnic cleansing” in Jerusalem and planning “a forced mass Palestinian expulsion from the area”. It also calls for international pressure on Israel, which it says could include Boycotts, Divestments, and Sanctions (BDS).

MEMO is a UK-based Islamist pressure group, which the UK Jewish community’s antisemitism watchdog accuses of crossing the line into antisemitism. The CST told i24NEWS: “MEMO’s work includes supposed anti-Zionism that is actually strikingly familiar from older forms of antisemitism, but with Jews removed and so-called Zionists used instead.”

The UK Labour Party declined to comment on why Corbyn did not declare the funding of the trip, but defended his meetings with Hamas officials. A Labour spokesperson told i24NEWS, “Jeremy has a long and principled record of solidarity with the Palestinian people and engaging with actors in the conflict to support peace and justice in the Middle East. That is the right thing to do.”

The trip began with meetings with representatives of the Islamic Movement representatives in the Arab town of Umm el-Fahm. The organisation’s leader, the firebrand cleric Raed Salah, had previously been jailed by Israel for inciting antisemitism and violence. Jeremy Corbyn later attracted criticism for describing him as a “very honoured citizen”.

Corbyn met a group of Hamas politicians in Ramallah, receiving a “most warm welcome” according to the report. He met Mahmoud al Ramahi, Muna Saleem Mansour, Naser Abd El-Jawad, Omar Abdel-Razeq, and Aziz Dweik in Ramallah.

Corbyn also visited the protest tent of the three Hamas officials who staged a sit-in at the Red Cross compound in Jerusalem, when Israel tried to expel them from Jerusalem because of their membership of Hamas. Ahmad Attoun, Khaled Abu-Arafah, and Muhammad Totah had been charged with membership of a terrorist organisation.

Corbyn reported on his experiences in The Morning Star after returning home, writing, “It is time to bring those Israelis who committed crimes against humanity to account and to end the EU Israel Trade Agreement while the occupation and settlement policy continues.”

The European Union considers Hamas a designated terror organisation. Corbyn has previously called members of Hamas his “friends”, a statement he has since said he regrets.

Joan Ryan MP, the chairperson of Labour Friends of Israel, told i24NEWS Jeremy Corbyn must apologise immediately for his meetings with Hamas.

“It is appalling that Jeremy Corbyn chose to meet with representatives of an antisemitic terror group which seeks the destruction of Israel,” she said. “Hamas is responsible for some of the most heinous terrorist crimes over recent years, including the murder of teenage girls outside a disco, and families in pizza restaurants and cafes. He should apologise immediately to the bereaved families of those butchered by these terrorists.”

The future Labour leader was accompanied by Labour colleague Andrew Slaughter MP, as well as by his current spin doctor Seumas Milne.

Corbyn also visited the wife of a man convicted of spying for Hezbollah, whom the report called a “political prisoner”. The delegation met Arab-Israeli lawmakers Jamal Zahalka and Taleb el-Sana, visited Silwan and Sheikh Jarrah in Jerusalem, and attended a Bedouin protest. The group also met Palestinian Authority officials and visited Jaffa.

According to the MEMO report, Corbyn’s delegation did not meet a single Israeli Jew.

“I imagine he’s met more people who have killed Israelis than actual Israelis,” said a senior Labour insider, speaking on condition of anonymity.

The UK Embassy in Tel Aviv and Consulate-General in Jerusalem told i24NEWS they have no records of Corbyn’s November 2010 visit. But at the time of the visit, a Consulate spokesperson told Ma’an News: “They [the MPs] came here on their own. They don’t represent the government.”

These revelations come as Corbyn faces increasing scrutiny over his undeclared visit to Tunisia in 2014, when he laid a wreath on the grave of the masterminds of the 1972 Munich Olympics Massacre.

He insists that his trip, including flights and two nights at a five-star hotel, fell below the financial threshold for disclosing gifts—a claim British media have disputed.

Earlier today, the Daily Telegraph reported that Jeremy Corbyn attended a 2012 conference in Qatar on Palestinian refugees attended by a convicted Hamas military leader previously jailed for his role in a string of terrorist attacks that murdered over 100 people.