You are here: Home / Mediterranean / Convergence of views between Algeria, Tunisia on settlement of Libyan crisis 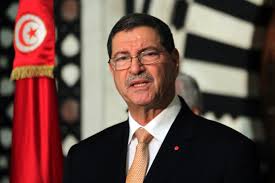 The Head of the Tunisian Government Habib Essid affirmed Monday, in Algiers, the convergence of views between his country and Algeria concerning the need to urgently achieve “a political settlement” to the Libyan crisis.

In a statement to the press, following the audience granted to him by President of the Republic Abdelaziz Bouteflika, Essid underlined “the convergence of views between the two countries concerning the need to urgently achieve a political settlement to the crisis in Libya.”

On this occasion, the head of the Tunisian government reaffirmed “the support” of the two countries to the United Nations’ efforts concerning the situation in Libya while hoping that these efforts will be successful.

He underlined the necessity to “prepare for the step that will follow the agreement,” pointing out that the two sides agreed to “play a fundamental role in the current and next stages.”

Essid emphasized the two countries’ willingness to launch “very soon” initiatives to “speed up the political resolution of the Libyan crisis.”