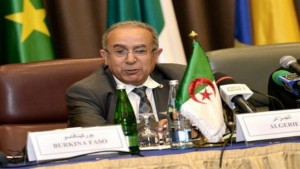 Minister of State, Minister of Foreign Affairs and International Cooperation Ramtane Lamamra affirmed Tuesday, in Beirut, that the final document to emerge from the consultations on the European Neighbourhood Policy (ENP) must reflect the aspirations and  willingness of the Arab countries to be stakeholders in the establishment of the international order.

“We hope that the final document that will emerge from these consultations (on ENP) can reflect our aspirations for this partnership and willingness of the Arab countries and those of the southern shore to be stakeholders in the establishment of tomorrow’s international order,” said Lamamra in a statement to APS upon his arrival in the Lebanese capital.

He underlined that his visit to Lebanon includes a multilateral component which consists in taking part in the conference of consultations on ENP, underway in Beirut, and a bilateral component aimed at encouraging the development of the Algerian-Lebanese cooperation.

The State Minister explained that the Conference on the consultations on ENP is “the second sequence of the meeting held last April, in Barcelona (Spain), in which the Southern Mediterranean Arab countries expressed their viewpoints and expectations on this policy.”

In this regard, he underlined the need to develop a common approach to take into consideration the expectations and concerns of the Arab countries.