You are here: Home / Mediterranean / Congress in Tripoli agrees to join Geneva, but rejects Draft 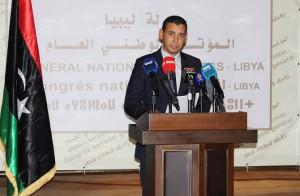 After more than a month of boycotting the UN-brokered Libya Dialogue negotiations because of its opposition to the Draft agreement presented by UN Special Envoy Bernardino Leon, the continuing General National Congress (GNC) in Tripoli has agreed to send its team to the latest round, due to begin later today, Monday, in Geneva. The GNC has made it clear, however, that while it wants to continue with dialogue, it rejects the Draft and expects the UN to agree to make changes.

The presence of the GNC team appears to be conditional on Leon accepting the demand.

The decision came during a stormy session in Tripoli yesterday in which, according to several sources including one from the Justice and Construction Party (J&C), GNC president Nuri Abu Sahmain almost came to blows with Nizar Kawan, the nominally independent representative from Hay Al-Andalus but who is regarded as one of the leaders of the J&C in Congress. Kawan, who is said to have collapsed after being threatened, had been calling for Congress to return to the Dialogue and accept the Draft, already approved in principle by the J&C leader Mohamed Sawan. Abu Sahmain, at that point, is said to have been adamantly opposed to any return.

At one point, the sources claimed, presidential guards were called in to restore order.

Following the meeting, Abu Sahmain wrote to Leon saying that the GNC team would join the Geneva talks but expected to discuss amendments to the Draft which in its current form it rejected.

For its part, the House of Representatives has said that it will accept no changes to the text of the Draft.