You are here: Home / MidEastGulf / “Conflict with US will never end”, Iranian Navy Chief Ali Fadavi 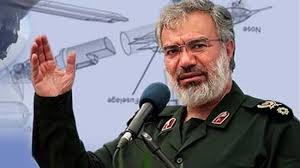 The conflict between Iran and the US will never end, as it is a basic struggle between two polar opposites, a top Iranian military commander said.

“The Americans have been the origin of any action taken against the Revolution (in Iran) during the last 4 decades,” Navy chief Ali Fadavi said, according to the Fars news agency.

“The raison detre of our quarrel with them is a quarrel between the right and wrong in nature, hence, this conflict will never end.”

Americans, he said, only understood force, but were incapable of waging war against Iran.

“Today the Islamic Republic enjoys such a power and capabilities that the enemy cannot even think of confronting Iran,” he said.

Also Sunday a panel of Iranian lawmakers said the inspections regime underpinning the country’s nuclear deal with world powers represented a security threat, but the agreement should go ahead anyway.

The 15-member committee spent weeks reviewing the text of the July 14 agreement, known as the Joint Comprehensive Plan of Action (JCPOA), for what it said could be breaches of negotiators’ “red lines.”

The panel had largely been sidelined over its ability to influence the accord’s fate although its report paves the way for a formal vote in parliament.

A law passed earlier this year gave final oversight of the nuclear deal to Iran’s Supreme National Security Council (SNSC), rather than lawmakers, many of whom have railed against the agreement.

The SNSC is headed by President Hassan Rouhani, who came to power in 2013 after campaigning to end the international dispute and end sanctions imposed over Iran’s nuclear program.

The lawmakers, however, said the review made “the assumption that Iran’s negotiating team had enjoyed the supreme leader’s trust” during the talks that led to the deal and its passing would see sanctions lifted.

At any rate, Iranian Supreme Leader Ayatollah Ali Khamenei has the last word on all policy matters in the Islamic republic as his authority trumps Rouhani and all politicians. His speeches often backed the negotiators but stopped short of endorsing the deal.