You are here: Home / Europe / Conflict round Karabakh is serious threat to war in Europe 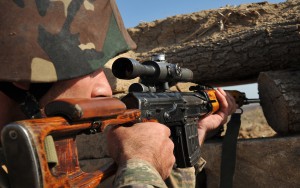 The conflict round Nagorno-Karabakh remains one of the most serious threats to the war in Europe and security in South Caucasus, Jos Boonsta, Head of the Eastern Europe, Caucasus and Central Asia programme at FRIDE think tank told Armenian News – NEWS.am, referring to the current tense situation on the border between Armenia and Azerbaijan, as well as the shootings from the Azerbaijani side on the civilians in Armenian villages.

Boonsta reminded that during the last years, the situation on the border between Armenian and Azerbaijan exacerbated several times, especially in summer. According to him, skirmishes and violence always hold potential of growing into war.

“For the last several years no new initiative was proposed in order to bring the representatives of Armenia and Azerbaijan to the table and invest international efforts to settle the conflict. At the same time, the chief negotiation format – the OSCE Minsk Group – gave no impulse,” Boonstra said.  According to him, additional and new efforts are needed also when the OSCE Minsk Group countries (France, United States and Russia) do not get along with each other over Ukraine.

Yesterday evening Azerbaijani Armed Forces fired at about 20 Armenian villages of Armenia’s Tavush province. As a result of Azerbajian’s breaking of the ceasefire, two civilians were injured. Besides, on September 1, two Armenian soldiers – Vladimir Gevorgyan, 19, and Gor Gevorkyan, 22 – were wounded as a result of the Azerbijani firing in the direction of Tavush.