You are here: Home / MidEastGulf / Conflict among Syrian forces may draw US into proxy fight 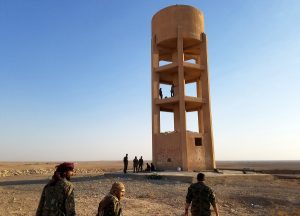 American-backed Syrian opposition fighters were standing watch against Islamic State militants from atop a water tower earlier this month when they were shocked to face a barrage of mortar shells — not from militants, but from the Syrian army, like reported by stripes.com.

Syrian opposition fighters and their U.S. allies tried to maintain a strained detente with President Bashar Assad’s Russian-backed forces as the battle against the Islamic State has shifted this month across the border from northern Iraq to eastern Syria.

But there’s an essential conflict: Many of the U.S.-backed fighters also want to overthrow Assad, who has stubbornly clung to power through six years of a civil war that has spawned a multitude of competing armed groups and drawn in forces from Russia, the United States, Iran, Iraq, Turkey and Lebanon.

As Assad’s troops gain a foothold in Dair Alzour, the crossroads of a strategic land corridor from Tehran to Beirut, U.S.-trained opposition fighters and allies nearby said they hope to take a stand with American backing, potentially drawing the U.S. into a long and costly conflict.

In recent weeks, an 80-mile stretch of the Euphrates River has served as a buffer zone — a so-called deconfliction line — between U.S.-backed opposition fighters and the Syrian government.

To the west of the river, some of Assad’s estimated 40,000 soldiers are fighting with support from allied militias, Russia and Iran. To the east, some of the 55,000 opposition forces are fighting with help from U.S. forces. The U.S.-backed coalition said it has about 500 troops in Syria, but experts estimate that has grown to include up to 1,500 Marines, Army Rangers and special forces, plus 1,000 contractors.

U.S.-backed forces have largely focused on recapturing the Islamic State’s self-declared capital, Raqqa, while Assad’s forces and allies advanced on the militant stronghold of Dair Alzour to the southeast.

“The coalition mission is to defeat ISIS,” the coalition said. “We have no fight with Syrian or pro-regime forces as long as all forces adhere to the agreed-upon deconfliction line.”

But the Syrian government and its supporters have already made several forays across the buffer zone.

Last month, a Syrian fighter jet clashed with U.S.-backed forces south of Raqqa. Farther south, near the border with Jordan and Iraq, what appeared to be an Iranian-made drone attacked American advisers training Syrian opposition forces at a U.S. base in Tanf. That clash came soon after U.S. warplanes struck Iranian-backed Shiite militias approaching the base for the third time in as many weeks.

A U.S. coalition spokesman declined to say last week whether it would back Syrian opposition fighters should they confront Assad’s forces.

“Future operations depend on many different factors and we will not speculate on what the coalition or partner forces may do in the future,” the statement said.

Complicating matters is the instability of the Syrian opposition’s alliance of multi-ethnic militias that includes Assyrian, Arab and Kurdish forces, among others. Most are fighting as part of the Syrian Democratic Forces, an umbrella group created with help from the Pentagon, but each has its own agenda for what it will do once the militants’ “caliphate” falls.

The largest opposition militia is the Kurdish People’s Protection Units, or YPG, with about 25,000 troops, including Hamoud’s unit at the water tower. The militia’s political wing has been governing northeastern Syria since Assad’s government withdrew about four years ago, adopting the Marxist-inspired philosophy of Abdullah “Apo” Ocalan, whose image adorns not just YPG command posts but billboards and local squares.

Ocalan’s leadership could prove problematic for the U.S., particularly in its relations with Turkey. He was convicted of treason and sentenced to life in prison, and his Kurdistan Workers Party, or PKK, is considered a terrorist group by both Turkey and the U.S.

Earlier this month, YPG military leaders on the front lines said eastern Syria should govern itself according to Ocalan’s principles, not be beholden to Turkey or Assad.

“The regime allies are trying to extend, to control as much as they can,” said YPG commander Daman Frat from his post north of Dair Alzour. “We need to coordinate with the coalition to do an advance before the regime comes.”

He compared the situation outside Dair Alzour to Syria’s embattled northwestern border region of Afrin, where Turkey deployed added troops this month and shelled Kurdish fighters as tensions increased. The head of the Syrian YPG said the buildup amounted to a “declaration of war” and warned of coming clashes.

“If the coalition doesn’t help us now, the same thing will happen here,” Frat said — this time with the Syrian army, not Turkish, forces.

Outside his compound, a convoy of what appeared to be U.S. forces passed, headed south toward the front line. Marine convoys were visible farther north, as were encampments behind dirt berms that YPG officials identified as U.S. bases. The U.S. has at least 10 bases across northern Syria, the Turkish state news agency Anadalou reported last week.

U.S. officials declined requests to accompany or interview those forces.

One Kurdish commander, Orkesh Serdam, has been encouraged to see the U.S. expanding its makeshift bases in eastern Syria, but said that doesn’t mean America is willing to take on Assad’s troops.

“Now when we are fighting, we don’t put all our hope in the Americans. We always say, ‘Just imagine you don’t have airstrikes,’” said Serdam, 27.

Arab militia commanders in the Syrian Democratic Forces said they also want to recapture Dair Alzour, but are unsure if they can count on the U.S. to support them.

Members of an affiliated group, the 10,000-strong Army of the Revolutionaries militia, traveled east from Idlib province this month as a U.S.-Russian negotiated ceasefire was declared there. They had come to fight in Raqqa and, they hoped, Dair Alzour. They complained the U.S. coalition had failed to provide them with needed equipment, including armored cars and night vision goggles.

Why, the fighters asked, was the U.S. helping Iranian-affiliated Popular Mobilization Forces (also known as Hashd al Shabi) across the border in Mosul, Iraq, and would those militias ultimately help Assad — also aligned with Iran — recapture Dair Alzour?

“We all know that Hashd al Shabi are Iranian militias, they are under the control of Iran. And the U.S. is training them,” complained one of the fighters, Abu Ghayas, 45.

The Free Syrian Army, another opposition militia, already has about 2,500 forces north of Dair Alzour, according to a spokesman leading about 1,000 of the fighters in Raqqa who identified himself as Abu Imad, the nickname he’s known by on the battlefield. They are waiting to see if the battle becomes a proxy war.

“The future of Syria is in the hands of America and Russia, like a card game,” he said as he sat surrounded by dozens of fighters armed with rifles and automatic weapons at their post in an abandoned house east of the embattled city earlier this month.

Abu Imad, 30, mentioned what he saw as encouraging signs: President Donald Trump called Assad “an animal” in an April interview with Fox News. When Syrian forces unleashed chemical weapons on civilians in the central city of Khan Sheikhoun in April, Trump ordered swift retribution in the form of missile strikes. U.S. forces had trained some of Abu Imad’s militia fighters, and promised to train an additional 500.

He hopes they follow through soon. There has been infighting among the militias. Earlier this month, a Free Syrian Army commander squabbled with a Kurdish counterpart after withdrawing some troops from Raqqa under fire. The Kurdish commander accused them of deserting. Abu Imad insisted they had only partially withdrawn.

The Sunni Muslim militia leader saw a showdown coming in Dair Alzour, at least between Syrian militias and Assad’s forces (he insisted the opposition is largely united).

“If the regime takes Dair Alzour, they will not stop there. They will go to Raqqa and Hasakah” to the north, he said. “I want America to help us fight in Dair Alzour.”

To the west in Resafa, a remote desert village built around an ancient fortress, Zinar Kobani, the local YPG commander, also said he hopes he can count on U.S. support if his forces continue on their collision course with Assad’s army.

“It’s not part of our plan to attack the regime. But if someone comes to fight us, we will fight back,” said Kobani, 27.

For now, their red line is the water tower north of Resafa. If Assad’s forces try to pass it, closing the roughly five-mile dusty no man’s land in between, YPG troops will return fire.

They recently overheard military radio chatter suggesting an attack by Syrian forces in coming days. Soon after, Syrian troops closed the gap. So far, they haven’t tried to pass the tower.