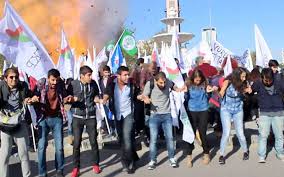 Prosecutors on Monday held four people suspected in the deadliest bomb attack in Turkey’s recent history and said they had discovered a cache of suicide vests, Kalashnikovs and hand grenades, according to state media and officials.

The four, who went before a judge on Sunday night to be remanded in custody, were charged with making “explosive devices with the intention to kill” and “an attempt to disrupt constitutional order,” according to the state news agency Anatolia.

The prosecutor in charge of the case issued a warrant for nine others accused of playing a part in the twin suicide bombings in Ankara on October 10 attack in which 102 people were killed.

Turkish authorities have said the Islamic State (IS) jihadist group is the “number one suspect” for the attack.

The blasts targeted a pro-Kurdish and liberal peace rally, which had called for an end to hostilities between Turkish security forces and Kurdish rebels.

Police on Sunday arrested some 50 foreign nationals in a sweep targeting suspected IS jihadists with alleged links to the bombings. Turkey is the main point of entry to Syria for IS recruits.

Prosecutors on Monday announced that stashes of weapons and ammunition had been found during searches of homes and vehicles belonging to suspects.

“A Ford Focus car used in the Ankara attack has been found, as well as 11 suicide vests, six Kalashnikovs, 22 hand grenades, 1,683 bullets and hundreds of kilograms (pounds) of explosives,” they said in a statement.