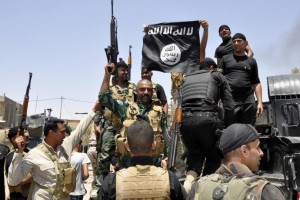 FBI Director James Comey warned Tuesday that the increasing success of the military campaign against the Islamic State in Syria and Iraq carries an ominous downside: a wave of terrorist fighters who will spread across the globe as the group loses control of its territory on the ground.

“The so-called caliphate will be crushed. The challenge will be: through the fingers of that crush are going to come hundreds of very, very dangerous people,” Comey said at a Senate Homeland Security Committee hearing on the global terror threat. “They will not all die on the battlefield in Syria and Iraq. There will be a terrorist diaspora sometime in the next two to five years like we’ve never seen before.”

“We must prepare ourselves and our allies particularly in western Europe to confront that threat because when ISIL is reduced to an insurgency and those killers flow out they will try to come to western Europe and try to come here to kill innocent people,” the FBI director said. He said the wave of fighters will be larger than the one that came out of Afghanistan after the war there in the 1980s.

Committee Chairman Sen. Ron Johnson (R-Wis.) acknowledged that the territory governed by ISIL has decreased, but he said the campaign against the group has been so slow that the group is reconstituting elsewhere.

“We haven’t reduced their capability. The diaspora has already begun,” Johnson said. “We’re poking the hive. We’ve done some damage to it but the killer bees are leaving the hive. They’re setting up new hives.”

“It’s not surprising. It puts us in a period of sustained vulnerability that I don’t think any of us are comfortable with. But I think it’s a reality,” he said.

Despite the fears of terrorist fighters flowing out of Iraq and Syria, some senators said a more urgent worry is that the FBI is missing opportunities to head off home-grown terrorist attacks like the shooting at an Orlando nightclub in June where 49 people were killed and the bombings earlier this month in New York and New Jersey.

Sens. Rand Paul (R-Ky.) and Kelly Ayotte (R-N.H.) noted that FBI investigators looked at the suspects in those attacks long before the violence, but closed those inquiries without bringing charges.

“I’m also troubled the FBI is not even willing to admit they made some mistakes,” Paul complained. “These are judgment calls and the judgment calls were incorrect and I think we should just admit that and look at some of the facts.”

Paul said the FBI failed to get video from a gun shop that could have shown shooter Omar Mateen buying a weapon shortly before the attack, but Comey said the FBI wasn’t told about that visit promptly and by the time it was notified the video was already erased.

However, Paul said the FBI should have kept an investigation into Mateen open longer because it might have exposed his plan to attack the Pulse nightclub.

Comey said the FBI can keep such probes open indefinitely and repeatedly extended the one in Florida.

“We should keep them open longer…as long as the facts warrant,” the FBI director said. “We have the policies and the tools we need to do this well.” He added that agents have to make a “judgement every day” about whether specific cases merit further investigation.

Ayotte questioned why agents handling the pre-shooting investigation of Mateen never looked at his social media or internet activity, even the publicly available information.

Comey said the FBI had two people interacting directly with Mateen, leading the case agent to think he had “a pretty good vector into [Mateen’s] state of mind.”

“It just seems surprising to me that there wasn’t some kind of online work done in something so significant,” the New Hampshire Republican said.

Comey said a review of the Florida probe is nearly done and another is in the works. He also said an assessment will be done of the handling of earlier inquiries into New York and New Jersey bombing suspect Ahmad Rahami, but that inquiry will be complicated by the pending prosecutions of the suspect who is currently in a Newark hospital being treated for a gunshot wound.

“We are going to go back,” the FBI director said. “You will find us being very candid about our shortcomings and our strengths.”