You are here: Home / Analysis / Combatting ISIS and political Islam with guns and keyboards 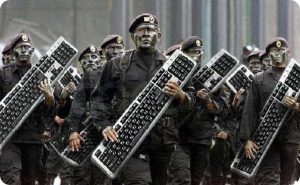 Critics have quickly pointed out that hard power alone cannot solve the crises in Syria and Iraq. This is the case in not only Syria but the Middle East as a whole. In combating ISIS, hard military power coupled with cyber capabilities that fight ISIS’ extreme Islamist ideology are both necessary to truly defeat ISIS and the ideology that inspires so many to engage in terrorist activities across the globe.

Since reaching its peak in 2014, increased international military action against ISIS across all fronts has thrown into peril the terrorist group’s ability to maintain control over territory. Without territory, ISIS’ overall message – the creation of the Caliphate – will be greatly damaged. However, premature declarations of victory over the extremists, while politically convenient, would be misguided, as the radical ideology continues to spread rapidly through the digital world and into homes in the physical world.

The violent and destructive power in the name of political Islam, has thrived in a complex interconnected world.  Those pursuing agendas of political Islam, including the violence of ISIS and other means adopted by groups like the Muslim Brotherhood and affiliates, use the religion of Islam to achieve political objectives, rejecting any distinction between religion and politics, imposing their will and beliefs on the entirety of a state’s population, dividing right and wrong between believers and non-believers.