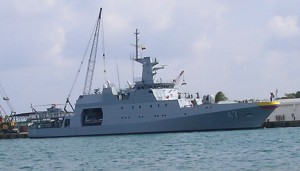 A Colombian navy patrol boat has joined the European Union’s counter-piracy operation off the coast of Somalia, Spain’s defence ministry, which leads the force, said Wednesday.

The patrol boat, the “7 de Agosto”, joined Operation Atalanta on Saturday after undergoing combat certification by the Spanish navy in the Bay of Cadiz in southern Spain, the ministry said in a statement.

“The experience will serve as a model for the future integration of other navies,” it added.

Spain in May took over the rotating helm of Operation Atalanta, which was launched by the EU in December 2008 to protect World Food Programme vessels delivering food aid to displaced people in Somalia, as well as to combat piracy off the Somali coast.

The force is mainly made up of EU member states. Norway was the first non-EU country to contribute to Operation Atalanta with a warship in 2009.

Last year Ukraine contributed a warship while New Zealand sent a maritime patrol and reconnaissance aircraft to the force.

A Spanish navy liaison team will be on board the Colombian navy patrol boat, which has a crew of 65 people, to help coordinate day to day operations.

Pirates operating from the Somali coast have raked in millions of dollars in ransoms from hijacking ships.

At the height of Somali piracy in January 2011, 736 hostages and 32 ships were being held by pirates, according to the EU’s External Action Service.

But over the past three years security for vessels and their crews off the coast of Somalia has improved significantly, with no merchant ship being pirated since May 2012.