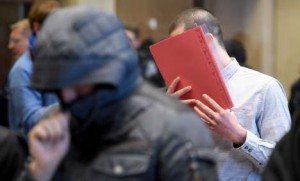 Eight young men appeared in court in Cologne on Tuesday charged with robbing churches and schools to finance Isis’ religious war in Syria.

When they broke into churches they stole collection boxes, crosses and other objects “dedicated to church services and religious veneration” prosecutors allege.

From the schools, the men stole laptops, money and a cash card, which they used to finance jihadist fighters in the Syrian civil war, alleged chief prosecutor Nadja Gudermann.

Security measures were heightened around the Cologne city court as the men were brought from police detention.

During the burglaries, which took place between 2011-14, the men are alleged to have stolen €19,000 worth of goods and often seriously damaged the premises before they left.

How much of the money actually reached fighters in Syria is unknown and will not be addressed in the trial.

The central figure in the gang was a Moroccan, prosecutors say, who also uploaded a video to YouTube encouraging Muslims to fight for Isis. He himself appears in the German section of the video.

Prosecutors allege that the 26-year-old Moroccan travelled to Syria where he was trained in a military camp.

Three of the men are also charged with supporting a foreign terrorist organisation and will face a concurrent trial in Düsseldorf.