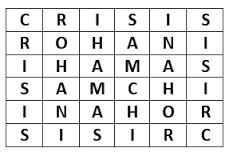 The Islamic State group, also known as ISIS, is found to have been using code words to communicate with its operatives during its ‘Jihadi Mission’ in India.

According to reports, Yusuf al Hindi, a former resident of Bhatkal in Karnataka, has prepared a dictionary of code words like Popo, Jarasim, Afgn, AQ, Arman, Armansani, Zarrar, and circulated it online. Yusuf is believed to be in Syria and supervising recruitment of Indian youth for the Islamist outfit.

ISIS uses the word ‘Popo’ to refer to police and ‘Jarasim’ to the National Investigation Agency (NIA). While Taliban is referred to as ‘T’ among the ISIS operatives, Al Qaeda is ‘AQ’ and Afghanistan is ‘Afgn’ for them.

Yusuf had used these code words to contact ISIS militants in Hyderabad and other parts of the country through a website justpaste.it, which allows users to paste text and share the resulting link.

ISIS operatives too have been given pseudo names to “deceive the security agencies.”

“Investigations revealed that Yusuf had sent a link from http:justpaste.it to wannabe ISIS activists either on Facebook or email or other media in which he had sent some code words for deceiving the security agencies on jihadi mission and how to become a good foot soldier for ISIS. He also clarified that it has to be kept confidential,” NIA officials found during their investigation.