You are here: Home / Africa / Coast is clear: Pirates in retreat after Navy increases patrolling 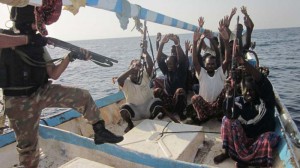 The Western Naval Command (WNC), which is based in the city, says it has achieved a major success in combating pirates. The Navy announced that intensive patrolling in Gulf of Aden and off the Somalia coast has led to pirates shifting bases.

The two locations are important sea lanes for trade. The WNC controls the anti-piracy operations. Currently, INS Trishul, extensively patrols the seas at these locations and is the pivot of the missions. On December 3, aircraft carrier INS Vikramaditya along with several other warships took part in patrolling Gulf of Aden and the Somalia coast. Last year, there were four attacks by pirates in Gulf of Aden and three off Somalia seas. The Navy has so far escorted 3,000 merchant vessels to safety and foiled piracy attacks on 46 ships at other locations.

A report by the ICC International Maritime Bureau (IMB) showed a decrease in piracy cases reported across the world. While 245 cases took place last year, the figure for 2015 is 223. The IMB, which is based in the United Kingdom, said a crackdown by the Navy has reduced serious attacks in southeast Asia. However, IMB urges vessels to maintain vigilance while travelling in Somalia waters as the threat of piracy has not been eliminated completely. A day prior to the Navy Day celebrations, the WNC Vice Admiral SPS Cheema said the economy is directly linked to the growth in trade and most of India’s voluminous trade is carried out using the sea route for import and export. “The Middle East remains a major source of the country’s crude oil imports. Our Navy ensures that the trade via the sea is safe at all times thereby guaranteeing unhindered growth of our economy. Our efforts have resulted in zero piracy this year in Gulf of Aden and Somalia,” said Cheema.

Cheema said good coordination and understanding with all agencies and stakeholders—Coast Guard, Marine Police, Customs, the fishing boats—is encouraged to prevent threats emanating from the sea

The pirates have been kept on their toes since 2011 when the Indian Navy and the Coast Guard officials caught 120 of them from Somalia in three different attacks. The pirates are facing trial on charges of murder, hijacking and waging war against the Indian government.

They are lodged at the Taloja jail. Given India’s strategic location, the Navy requires continuous monitoring of eight major shipping lanes, with a large number of foreign warships being present round the clock. More than one lakh ships pass through the waters along India’s coast annually. “If this trade were to be disrupted for any reason, then it would not only be India’s but the world economy’s loss,” said Cheema.