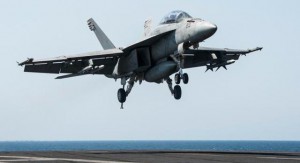 A security source in Anbar province said Saturday, that the international coalition aviation has killed dozens of ISIS elements, including a prominent Syrian leader, during an aerial bombardment in west of the province.

The source, who spoke on condition of anonymity, informed IraqiNews.com, “Warplanes of the interactional coalition, with coordination with the army forces had bombed two sites for the ISIS organization in the area of al-Dulab, located in the city of Heet (70 km west of Ramadi).”

The source noted, “The aerial bombing resulted in killing dozens of ISIS elements, including the Syrian prominent leader Abu Anas al-Shami, and inflicting big material losses upon them.”