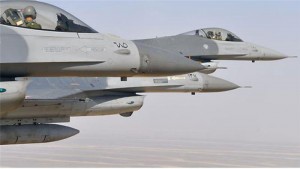 Yemen’s Houthi group said aircraft of an Arab coalition bombed a security compound in the capital Sanaa where suspected al Qaeda militants and foreigners accused of spying, including Americans, are held.

The Saudi-led coalition has been conducting air raids against outposts and military facilities of the Iran-aligned Houthis and forces loyal to former President Ali Abdullah Saleh since March last year in a campaign to try to restore ousted president Abd-Rabbu Mansour Hadi.

The Houthi group, in a statement carried by sabanews.net news agency, quoted a source at the country’s national security service as saying that coalition aircraft had caused a number of casualties among residents living in the vicinity of the compound that was bombed.

“This apparatus is not a military establishment but a security one concerned with fighting terrorism and to limit the spread of its organisations,” sabanews.net quoted an official at the service as saying.

“He holds the aggression (the coalition) responsible for exposing those held there to danger, be it terrorist elements or those held for spying from Arab and foreign countries, including Americans,” it added without giving any further details.

The coalition has made no comment on the report, but officials say aircraft of the Saudi-led alliance only target military facilities in Yemen.

Fighting has escalated since U.N.-sponsored peace talks in Kuwait ended without an agreement last month. The United Nations says that at least 10,000 people have been killed since March 2015, including many civilians.