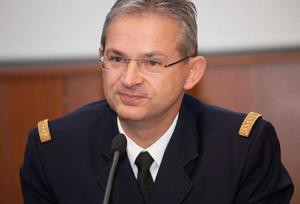 The US-led coalition carrying out air strikes against the Islamic State group needs to target the jihadists’ command centres, but this is easier said than done, French army chief Denis Mercier said Wednesday.

He compared operations in Iraq, where French warplanes are carrying out air strikes, and Syria, where the US is bombing jihadist positions, to the 2011 international intervention in Libya.

“In Libya we went after (Libyan leader Moamer) Gathafi’s centres of gravity… it was by attacking these centres that we managed to topple Gathafi, not by firing at 150 pick-up trucks a day. Otherwise we would still be there,” Mercier told journalists.

“It is exactly the same problem in Iraq today. We are shooting at the frontline but behind that we need to concentrate on the centres of gravity.”

He said the difficulty was that these command centres were mostly based in Syria.

France has ruled out joining air strikes against IS in Syria until a credible political transition has taken place in Damascus.

Washington and its Arab allies who are bombarding IS in Syria face a delicate situation as they seek to combat the jihadists without boosting President Bashar al-Assad in his separate war against moderate opposition rebels.

Mercier brushed off criticism that the coalition’s bombing campaign was not having the desired effect, after a series of key battlefield advances by the IS group.

“If we had not been there, honestly, the situation would be settled: Daesh (IS) would have taken control of everything, Baghdad, etc,” he said.

“These rather intense air operations allow us to give Iraqi forces freedom to act on the ground. Full stop.

“Afterwards the ball is somewhat in their court… the problem is you need a ground offensive by these Iraqi forces which is complicated by the overlapping of different communities,” he said, referring to the Sunni and Shiite fighters who are deeply distrustful of one another.

The French army says its warplanes have carried out 135 air strikes in which it has destroyed some 200 targets.

“We speak a lot about the air strikes but our most significant contribution is that of intelligence,” Mercier added.

The US has carried out some 4,000 air strikes in Syria and Iraq, but this did not prevent IS from taking the key Iraqi city of Ramadi and Syria’s Palymra in a matter of days last month.

However the coalition said at a meeting last week it has the “winning strategy” in training Iraqi troops and supporting them with air strikes.