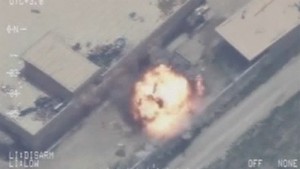 The US-led coalition claims it has killed ten leading so called Islamic State terrorists in the last month in both Iraq and Syria.

The men are said to include military commanders, IS executioners and a leading bomb maker.

A spokesman from Operation Inherent Resolve (OIR), the US military operation name for the military intervention against ISIL, said:

“… in addition to our tactical operation, we are also striking at the head of this snake by hunting down and killing ISIL leaders.

Over the past month, we have killed ten ISIL leadership figures with targeted airstrikes, including several external attack planners, some of whom are linked to the Paris attacks. Others had designs on further attacking the West.”

US officials say the strikes were carried out by a mixture of jets and unmanned drones.

All part, they say, of the coalition’s growing ability to hit ISIL’s leadership and kill those planning attacks in not just Syria and Iraq but also the west.