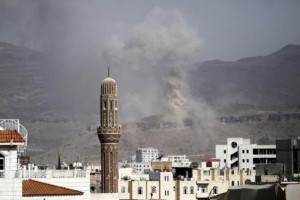 Warplanes from the United Arab Emirates struck Houthi targets across Yemen, state news agency WAM said on Saturday, a day after at least 60 soldiers from a Saudi-led coalition, mostly Emiratis, were killed in an attack in central Yemen.

Medical sources at hospitals in the capital Sanaa, which has been under effective control of the Iranian-allied Houthi militia for almost a year, said about 24 civilians were killed in the city as a result of the attacks.

Asiri told Al Arabiya TV that four Yemeni soldiers were also killed in the attack on the coalition base in Marib.

Friday’s death toll was the highest for the coalition since it began its assault on the Houthis in March, and is one of the worst losses of life in the history of the UAE military.

The UAE has played a key role in a Saudi-led Arab coalition fighting the Houthis after they pushed Yemen’s President Abd-Rabbu Mansour Hadi into exile and took over much of the country.

UAE forces assisted fighters loyal to Hadi in driving out Houthis and their allies from the southern port city of Aden, in a key victory for the coalition.

In Aden, a government official said the police resumed their duties on Saturday with the help of the UAE after their work was suspended for more than five months due to the war.

In Sanaa, residents said the Houthi-controlled Defence Ministry building and the command of the special security forces were among the targets hit in further strikes by Saudi-led forces overnight.

The bodies of the Emirati soldiers killed in the attack on their base in Marib were taken to Abu Dhabi aboard an air force transport plane. Funerals were being held on Saturday. The UAE government has announced a three-day mourning period.

Bahraini officials said the five soldiers killed in the attack were also being buried on Saturday.

UAE Minister of State for Foreign Affairs Anwar Gargash told Al Arabiya that the troops were killed when a surface-to-surface missile struck a weapons storage facility at the Marib base.

Saudi Arabia and the UAE have reported several deaths of soldiers in Yemen since March, but the total death toll for the coalition was not clear.

More than 4,000 Yemenis have died in the same period.

Abu Dhabi shares Riyadh’s view that the Houthis are proxies of Shi’ite power Iran, accusing it of trying to expand its influence in Arab lands in Yemen, Syria and Iraq. The Houthis, who belong to the Zaydi branch of Shi’ite Islam, deny acting on behalf of Tehran and say they revolted against corruption.

Hadi loyalists, backed by the Saudi-led coalition, had been massing troops and weapons in Marib in preparation for an assault on the capital, which the Houthis seized in September last year.

“The incident itself does not change the balance that is there,” Gargash said in an interview with Al Arabiya TV. “Marib will fall to the coalition,” he added.

Residents in Sanaa fear the coalition will step up its raids even further to retaliate for the attack.

“I was close to the raid that hit the command of the special security forces, the explosions were horrific, I felt that the ground was shaking beneath me and people were running away out of fear,” said Shawqi, a taxi driver.