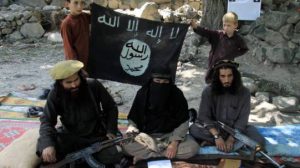 Three leaders of Daesh have been killed since ISIS-Khurasan declared its presence in Afghanistan. After Hafiz Sayed and Abdul Haseeb, Abo Sayed, who was the third leader of the terrorist group, has been killed in a recent drone strike in Kunar province, like reported by thekabultimes.gov.af.
US force Commander to Afghanistan Gen. John Nicholson has said US forces were waiting to kill the fourth leader of ISIS-K in Afghanistan if announced by the terrorist group.
In consideration to dropping Mother of all bombs (MOAB) in Achin district on Daesh and retaking Tora Bora from the group, can we predict rooting out of the terrorist group until end of the year as promised by MoD and foreign forces?
It seems that prediction for rooting out the group can be difficult until ‘Daesh conundrum’ is not resolved. ISIS-K has been able to keep parts of its captured territory despite air strike and operations launched by Afghan national defense and security forces.
The respective terrorist group is active in three districts of Nangarhar and some parts of Patkia, but the group has recently expanded its infiltration on some parts of Sar-e-Pul and Faryab provinces. Moreover, Daesh has been able to recruit individuals in some parts of the country’s Northern provinces and found havens for displaced Taliban individuals, so no date can be perceived for ending and rooting out the terrorist group in Afghanistan. Replacement of the group’s leading is still supporting this vision. We should definitely wait for the announcement of the group’s fourth leader who might be one of commanders of Pakistani Taliban group as Hafiz Sayed and most of other mid-level commanders of the group.
From this perspective, killing of the terrorist group’s commanders gives no message of rooting out Daesh in Afghanistan as the group has established a center in which can gather deserted commanders of Afghan and Pakistan Taliban. Killing of the group’s leaders can only create disorder in leading of the group and small gaps in operations of the group in the country.
Due to not depending on ISIS based in Iraq and Syria, replacement for leading and commanding Daesh based in Afghanistan is very simple; therefore, the only way to fight Daesh and root out the group in Afghanistan is a strategic plan which could target recruitment centers and safe havens of the group in both sides of the Durand Line although Daesh is not openly operating in border areas including Pakistan territory because the group is against Taliban and government of Pakistan and could not have taken opportunity to expand its operations in border areas of Pakistan.
The government of Afghanistan and its national defense and security forces can entirely root out Daesh in the country when they get the ability to precisely control Duran Line. Defeating the group without closing its hotbeds and overwhelming its combat machineries is impossible; hence, the claim made by MoD and Gen. Nicholson related to rooting out the group until end of the current year will be followed by serious obstacles and doubts.
It is worth mentioning that operations have been expanded against Daesh in many parts of Afghanistan where most of armed individuals of the group are foreigners not Afghans and foreign forces to Afghanistan are committed to continued cooperation with Afghanistan government in rooting out the terrorist group. Meanwhile, Daesh has not confirmed the death of its leader Abo Sayed so far.