You are here: Home / MidEastGulf / Clashes near Syrian base besieged by Islamic State 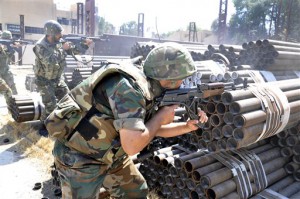 Pro-government forces in Syria clashed with Islamic State fighters around a military air base in the north of the country on Tuesday as they tried to break the jihadists’ siege of the facility, a group monitoring the war said.

The Syrian Observatory for Human Rights said forces fighting on the side of the Syrian government, including Lebanese and Iranian militiamen, were trying to enter and secure Kweires air base, which has been under attack for nearly two years.

There were some initial reports that the pro-government forces sent to relieve the siege had managed to break through the encirclement and enter he base which is east of Aleppo city after heavy clashes, the Observatory said.

Russia has been carrying out air strikes in the area.

The assault comes a week after the Syrian army battled Islamic State to regain control of a road southeast of Aleppo and took back control of the government’s only supply route into the city.

Areas around Aleppo have seen weeks of heavy fighting after Syrian troops, backed by Lebanese and Iranian fighters, launched an offensive to retake surrounding territory from rebels and jihadist fighters.

The offensive has concentrated so far on clearing insurgent-held areas south of Aleppo rather than the city itself and is one of several assaults carried out by ground forces since Russian jets began air strikes on Sept. 30 in support of President Bashar al-Assad.