You are here: Home / Mediterranean / Clashes in Tripoli between Tripoli Revolutionaries’ Brigade and Misratan forces 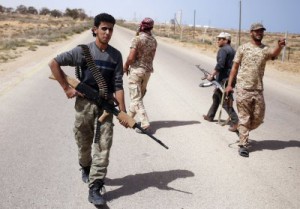 Clashes broke out between the Tripoli Revolutionaries’ Brigade (TRB) and a Misratan militia near Triq Al-Sika (“Railway Road”) and in the area of the Sidi Masri roundabout.

Heavy weapons were used and the firing was random, especially in the area along the main road by Tripoli University and Tripoli Medical Centre, causing panic among passing drivers and passengers. The clashes also continued after sunset to Hay Demashque and by the government hospitality buildings there opposite the Rixos hotel, currently being used by the State Council.

The clashes followed a warning three days ago from the TRB, led by Haithem Tajouri, to people who had misappropriated land on government land between the adjoining Hadba and Abu Sleem districts to quit the area and remove buildings erected within 72 hours or force would be used against them.

Most of those who had taken over the land are alleged to be Misratans linked to the militias.

This evening at checkpoints set by the TRB near Sidi Masri district, it is reported that anyone from Misrata was being arrested. Misratans in Tripoli have been phoning each other warning them to avoid the area.

There has been growing resentment in the capital at the presence of the Misratan forces which are being used to protect the Presidency Council and equally between them and local militias.  There have already been several clashes between the TRB and Misratan militias.