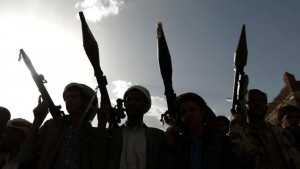 At least 12 rebels and three pro-government fighters were killed in fierce battles in southwestern Yemen on Wednesday, military sources said.

“We will continue our advance towards Taiz (city) to break the siege” imposed for more than a year by the Houthi rebels on Yemen’s third city, Hasan said.

In Taiz province, five Houthis and their allies were killed when loyalists backed by coalition airstrikes and artillery fought off a rebel assault in Kahbub area, a loyalist military leader said.

Three pro-government fighters were also killed in the fighting, Colonel Abdul Ghani al-Subaihi said, in a mountainous area overlooking the strategic Bab al-Mandab Strait at the entrance of the Red Sea.

Guarding the area are forces from the Saudi-led coalition, which intervened in Yemen in March last year to support President Abd Rabbo Mansour Hadi’s government after the Iran-backed rebels seized the capital Sanaa.

The car appeared to be headed to the province of Marib, they added.

The US, which rarely acknowledges its years-long unmanned drone campaign in Yemen, is thought to have carried out dozens of strikes against what it says are members of al-Qaeda in the Arabian Peninsula (AQAP).

AQAP and the Islamic State group have exploited a power vacuum created by the conflict between the government and Iran-backed rebels to expand their presence in the Arabian Peninsula country.

The US has vowed to continue its campaign against AQAP, which it considers to be the al-Qaeda network’s deadliest franchise.

The Saudi-led Arab military coalition that backs the Yemeni government has also turned its sights on AQAP, targeting it with airstrikes.

Yemen’s conflict has killed more than 6,600 people, most of them civilians, and displaced at least three million others, according to the United Nations.

Fighting has intensified since the collapse of UN-backed peace talks in Kuwait on 6 August.