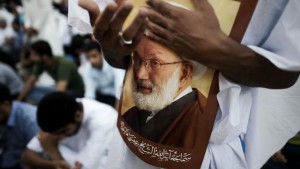 Clashes erupted between police and protesters in Bahrain on Monday before a hearing in the trial of a leading Shia cleric accused of illegal collection of funds and money laundering, witnesses said Monday, according to alaraby.co.uk/ .

“With our soul, with our blood, we sacrifice ourselves for you Qassim,” crowds chanted, some holding pictures of the cleric.

Qassim was not in court for Monday’s brief session, which was held under tight security in the capital. The next session was scheduled for 12 February, a judicial source said.

Hundreds of Shia Bahrainis have been arrested and put on trial since security forces backed by Saudi-led troops crushed in March 2011 month-long protests that demanded democratic reforms.

The interior ministry in June stripped Qassim, 75, of his Bahraini nationality and accused him of abusing his position as a cleric to “serve foreign interests and promote… sectarianism and violence”.

He is also accused of misappropriating funds.

His trial has drawn criticism from rights groups as well as neighbouring Iran, which Bahrain accuses of aiding anti-government protesters and militants.