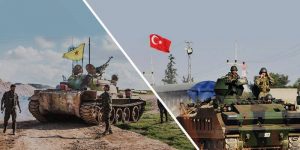 Clashes continued for the third consecutive day between Kurdish fighters of the People’s Protection Units (YPG) and Turkey’s military in several areas in northern Syria, military sources reported on Friday according to aranews.net.

“The Turkish artillery bombarded YPG security checkpoints and residential buildings in Afrin countryside, killing and wounding dozens, most of them civilians,” a spokesperson for the YPG told ARA News.

The bombardment led to clashes between the Kurdish units and Turkish military forces in the sub-districts of Rajo and Shiya.

“Our units responded to the Turkish offensive by hitting the positions of the Turkish troops near Susk hill in Afrin. At least three military vehicles were destroyed by YPG fire,” the Kurdish official said.

The YPG also released a video showing the destruction of a Turkish base in northwestern Aleppo.

“At least 17 Turkish soldiers were killed and three others were wounded under heavy bombardment by the YPG,” a member of the YPG media office in Afrin told ARA News.

The source added that the clashes between the YPG and Turkey’s military are still ongoing in the Shiya and Rajo sub-districts.

This comes after the Turkish jets killed over 25 Kurdish fighters in Iraq and Syria on Tuesday.

The US-led coalition expressed concerns over the Turkish attacks against the Kurdish fighters who are in war with ISIS in northern Syria.

“We call on all forces to remain focused on the fight to defeat ISIS, which is the greatest threat to regional and worldwide peace, security,” said Air Force Col John L. Dorrian, Spokesman for the US-led coalition against ISIS.

“Turkish strikes were conducted without proper coordination with the Coalition or the Government of Iraq,” he said.

“Our partner forces have been killed by Turkey strike, they have made many sacrifices to defeat ISIS,” the American Colonel said. “We are troubled by Turkey airstrikes on SDF and Kurdish forces,” he added.

On Tuesday, the Kurdish-led Syrian Democratic Forces (SDF) called on the international community to intervene to stop the Turkish attacks.

“The regime in Turkey has consistently harmed the good neighborly relations through countless violations against our citizens and fighters in northern Syria,” the SDF said. “This was the most blatant attack of these crimes committed by the Turkish regime.”

“Therefore, we demand and appeal to the international community to intervene to put an end to this aggression and the ongoing violations on our territory,” the SDF concluded.