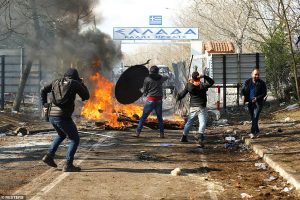 Greek authorities were firing tear gas and stun grenades Wednesday morning to repulse a push by migrants to cross its land border from Turkey, as pressure continued along its frontier after Turkey said its own border with Europe was open to whoever wanted to cross, like reported by apnews.com.

The clashes were near the border village of Kastanies, along a border fence that covers much of the land border not demarcated by the Evros river running along the frontier.

Turkey made good on a threat to open its borders and send migrants into Europe last week. Turkish President Recep Tayyip Erdogan’s action triggered days of violent clashes and scenes of chaos at the land border, where thousands of migrants and refugees have gathered.

Hundreds more have headed to Greek islands from the nearby Turkish coast in dinghies. One child died when the rubber dinghy he was in capsized off the coast of the Greek island of Lesbos earlier this week.

The government has called the situation a direct threat to Greece’s national security and has imposed emergency measures to carry out swift deportations and freeze asylum applications for one month. Migrants have been reporting being summarily pushed back across the border into Turkey.

Turkey’s announcement that it wouldn’t stop those wishing to cross into Europe came amid a Russia-backed Syrian government offensive into Syria’s northwestern Idlib province, where Turkish troops are fighting.

The offensive has killed dozens of Turkish troops and sent nearly a million Syrian civilians toward Turkey’s sealed border. However, Oleg Zhuravlev, head of the Russian military’s coordination center in Syria, said Tuesday the claims about a humanitarian crisis in Idlib were false.

Zhuravlev said Turkish authorities were “herding” about 130,000 refugees, who were in temporary camps near the Turkey-Syria border, toward the border with Greece.

“Two thirds of them aren’t Syrians,” he said. “They are Afghans, Iraqis and people from African nations.”