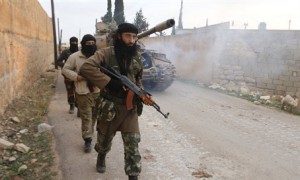 At least 23 fighters have been killed in clashes between Syrian Islamist forces including Al-Qaeda’s local affiliate and an alliance led by Kurdish forces, a monitor said on Monday.

The Syrian Observatory for Human Rights said 15 fighters from Al-Qaeda affiliate Al-Nusra Front and allied groups had been killed Sunday in fighting that began last week in northern Aleppo province.

The clashes also killed at least eight members of the Syrian Democratic Forces, which is dominated by the Kurdish People’s Protection Units (YPG).

The attack, near the border region of Azaz, prompted sporadic clashes that drew in the SDF and have also seen Al-Nusra and its allies fire rockets at a Kurdish district of Aleppo city.

In addition, the Observatory said, Al-Nusra on Sunday beheaded two men it accused of working with Jaish al-Thuwwar.

Syria’s Kurds have long had tense relations with parts of the armed opposition, particularly its hardline elements.

The minority community never officially joined the armed uprising against President Bashar al-Assad, despite having been oppressed by his regime, although there have been occasional deadly clashes between Kurdish and pro-regime forces.

It has refused to allow rebel forces to stage operations from Kurdish-majority regions, from which the regime withdrew in 2012, and has focused instead on building political and security autonomy.

The Kurds accuse Turkey of backing some of Syria’s Islamist rebels and Ankara has often warned it will not allow the establishment of an autonomous Kurdish region on its border.

However, the YPG, the main Syrian Kurdish armed group, has played a key role in fighting the Islamic State jihadist group (ISIS) in northern and northeastern Syria.

It has also allied with small Arab rebel groups, like Jaish al-Thuwwar, and recently announced the Syrian Democratic Forces coalition, which groups the YPG with Christian and Arab Sunni Muslim forces.

The US-backed alliance has so far mostly been active in the northeastern province of Hasakeh, where it has captured some 200 villages from ISIS in recent weeks.