You are here: Home / Mediterranean / Clashes continue in Sabratha between Libyan National Army and Libya Dawn 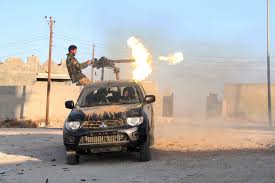 Clashes west of Tripoli in the Ajilat area between Libya Dawn forces, mainly from Sabratha, and local units linked to the Libyan National Army (LNA) continued intermittently during the day, according to an official from Sabratha Municipal Council, but had again subsided this evening.

There are reports that at least ten people, including civilians, have been killed since the clashes started on Saturday.

Sabratha Media Centre are claiming that pro-Dawn forces have now taken control of Ras Yusuf and west Ajilat, focus of much of the fighting in the past four days and viewed as strongly pro-Qaddafi regime. It also has published photos of what it claims are vehicles captured from LNA-supported forces. It says that in the past 24 hours, five fighters with those forces were killed, four Warshefanis and one from Taweela, while it lost one man.  He has been named as Shaban Al Atrash, from Ajilat.

It further claims that the road from Sabratha to Zuwara is now open.

Meanwhile, the road between Zawia and Tripoli has reopened although officials in Tripoli are warning people not to use it because it is still unsafe. Residents from Zawia are seen as particularly at risk.

Reports earlier during the day that the pro-Islamist head of Sabratha Military Council, Taher Al-Gharbali who also leads his own Gharbali Brigade, had been kiiled in the fighting yesterday, turned out to be untrue when he appeared on TV.