You are here: Home / MidEastGulf / Clashes break out between ISIL and al-Nusra east of Lebanon’s Arsal 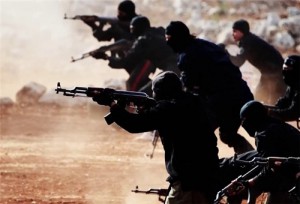 Fierce clashes broke out between al-Nusra Front and ‘Islamic State of Iraq and the Levant’ (ISIL) east of Lebanese border with Syria, over exchanging accusations of betrayal during the recent battle of Qalamoun.

The local Lebanese daily Assafir reported that the two terrorist groups have used different kinds of weapons during the clashes that erupted in Kassarat (quarries) area and al-Jarajir barren east of Arsal town.

Elnashra news website said that scores of gunmen from both sides were killed, and many others were left wounded.

Elnashra noted that an emir of ISIL, dubbed Abu Osama, and two other ISIL commanders in Qalamoun, Abu Mohamad Islam and Abu Abed al-Baghdadi were also killed during the clashes.

The army move came after the control chamber monitored suspicious movements and an attempt to approach the military positions.

Syria was hit by a violent unrest since mid-March 2011, where the western media reports accuse countries, mainly the USA, Turkey and Saudi Arabia of orchestrating the civil conflict in the country and providing terrorist groups with money, weapons and trained mercenaries.

On May 2011, Syrian army launched a wide-scale operation against terrorist groups and gunmen operating in the country, who started to escape the army blows and infiltrate illegally to Lebanon.