You are here: Home / Europe / Clashes among migrants at Chios Camp end with gunshots; 6 injured 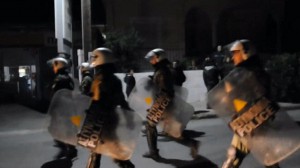 A group of Afghan migrants clashed with a group of Algerian migrants at the Souda camp on Chios, resulting in six injuries.

The violence escalated and the fights spread outside the camp. As groups of migrants were fighting outside a nearby restaurant, customers ran away scared. The owner took his hunting rifle and fired in the air five times. Riot police arrived on the spot soon after and the migrants were dispersed.

The incident started when a group of migrants from the ELVIAL camp tried to move to the Souda camp. However, the migrants staying in the already overcrowded camp reacted and confronted the new arrivals.

The violence that ensued resulted in six migrants being injured and transported to the Chios hospital. Two of them remained in the hospital for treatment, while the other four were released after receiving first aid.

Violence among migrants has become a daily phenomenon on Chios, with volunteer organizations blaming the poor management of the hospitality facilities. Other than the excessive number of migrants and refugees accommodated and the bad conditions, there is no separation between ethnicities. As a result, there are frequent fights between ethnic groups.