You are here: Home / MidEastGulf / Clash erupts between PKK and Iranian Kurds on Iran-Iraq border 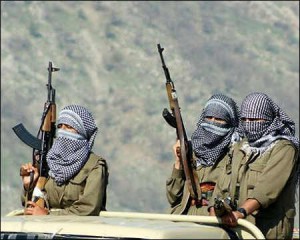 A battle broke out on the Iran-Iraq border between armed Kurdistan Worker’s Party (PKK) militants and members of the Kurdistan Democratic Party of Iran (KDPI), resulting in fatalities on both sides, news reports reveal.

The PKK, based in Turkey and Iraq’s Kurdistan region, has been listed as a terrorist organization by the United States since the late 1990s.

Daily Sabah and Rudaw report that at least two KDPI peshmerga fighters were killed in the clash, which erupted on the Iran-Iraq border on Sunday after two weeks of tense stand-offs.

PKK members reportedly fired their guns against fellow Kurds in Iran affiliated with KDPI, reports Daily Sabah, noting that the PKK lost four of its militants.

“Early this morning, the PKK attacked our peshmerga [units] and unfortunately, what we were afraid of just happened,” Mohammad Saleh Qadri, a KDPI spokesman told reporters on Sunday.

Unnamed local sources also attributed the clash to a dispute over control of an area that KDPI forces could use to launch an armed insurrection against Iran, something that PKK leaders want to prevent, notes Daily Sabah.

In a statement, Loghman H. Ahmedi, KDPI’s foreign relations chief, argued that his party’s support for the reconciliation process with Turkey instigated the deadly quarrel.

“The PKK has closed all paths of dialogue despite every attempt,” reportedly said Rustom Jehangiri, head of KDPI’s Military Commission, on Monday.

However, he added that KDPI remains open to negotiations with the PKK.

A day prior to the fatal attack, Turkish President Recep Tayyip Erdogan cautioned that the PKK is a serious concern, not only for Turkey, but for other nations in the region as well.

The parliament of northern Iraq’s Kurdistan Regional Government (KRG), which opposes the PKK, condemned the attack in a statement: “We seriously warn both Kurdish parties to avoid the use of violence and the gun in settling their political problems.”

Erdogan accused the PKK of trying to coerce Turkey’s Kurds into voting in favor of the Kurdish People’s Democratic Party (HDP), which he accused of employing “a policy of threats in southeastern regions of Turkey” ahead of the June 7 parliamentary elections.

“We aim to cherish life, but unfortunately the mentality backed by the terrorist group is still in pursuit of blood, life, threats and terrorizing,” said the president.

Erdogan, while speaking in the predominantly Kurdish province of Sanliurfa on Sunday, accused the PKK and HDP of trying to foment an atmosphere of terror in southeastern Turkey.

The Turkish leader reminded the audience of the Oct. 6-8 incidents that left an estimated 50 people dead when groups against and in favor of the PKK confronted one another.

“Here, this is the party [HDP] that is supported by the terrorist organization. Indeed, these divided the country. These pushed this country toward discrimination. They call it Kurd or Arab. They come into the square and say, ‘We are not the divider.’ How are you not the divider? You are the very image of a divider,” added Erdogan.