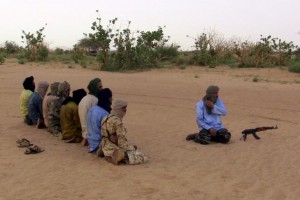 The United Nations has deployed 10,000 peacekeepers and poured more than $1 billion into Mali but its efforts to end a three-year conflict are threatened by the reemergence of a centuries-old rivalry between Tuareg clans.

The U.N. Security Council renewed the mandate of its Mali force (MINUSMA) in June in the hope that it could enforce a peace deal signed that month in the West African nation, despite suffering the highest rate of losses of any active peacekeeping mission.

The deal, signed by both pro- and anti-government Tuareg-led militias, envisaged the overhaul of the Malian army to incorporate the militia fighters and its return to the desert north, much of which is controlled by the Tuareg groups.

The army’s redeployment is supposed to allow it to tackle Islamist militants scattered, but not defeated, by French troops after they hijacked a Tuareg rebellion in 2012.

Now, a resurgence in fighting between the Tuaregs, who in total represent just 5 percent of Mali’s 15 million people, could wreck everything.

Diplomats say buy-in from the northern armed groups was always weak because the Algeria-brokered deal, reached after months of shuttle diplomacy, was seen as a foreign imposition.

“The fundamental problem is that participants don’t think this agreement can resolve the tensions that have always existed in the north,” said Jean-Herve Jezequel, senior Sahel analyst at International Crisis Group.

“They think that it’s really the force of arms that counts.”

In defiance of the peace agreement, the Platform alliance of pro-government militias has been seizing territory in northern Mali and taking revenge on its rival while authorities in Bamako look the other way, security sources say.

The leader of the main pro-government militia GATIA, General El Hadj Ag Gamou, is a former mercenary who fought for Libyan leader Muammar Gaddafi and a member of the Imghad clan.

Power tipped away from the Inghads in favour of the Ifogha clan when fighters from Libya returned after the 2011 revolution to form a state they call Azawad. Arabs have also picked sides and some former jihadists have joined them.

Clashes broke out between Gamou’s militia and the Ifogha-led separatist alliance, the Coordination of Azawad Movements (CMA), this month about 80 kilometres southwest of rebel stronghold Kidal, killing at least 20 people.

Sources in Kidal have reported an influx of fighters in recent days in pick-up trucks from Libya and Algeria, resulting in a possible CMA counter-attack.

“We will defend ourselves and our populations,” CMA leader Bilal Ag Cherif told Reuters this week.

GATIA’s Secretary General Fahad Ag Almahoud denies responsibility for the incidents, saying they are due to “intercommunal tensions”.

“We think the Malian army should hurry up and return and normalise the situation,” he told Reuters. CMA fighters are also accused of arrests and looting in the same area before June.

Security sources and analysts say old rivalries are being stirred by competition for control of trafficking corridors for both cocaine and legal goods like food and cigarettes north to Algeria and east to Niger.

“Gamou would like to get back the position he had before the rebellion with control over trafficking. He wants a fiefdom,” said Profesor Jeremy Keenan, editor of Menas Associates’ Sahara Focus publication.

Expansion may benefit armed groups if the peace deal proceeds as key army posts and development funding are expected to be distributed to Tuareg and Arab communities.

U.N. Special Envoy for the Mali mission, Mongi Hamdi, estimates that implementing the deal will cost an additional $1-$2 billion over two-three years.

While Gamou is ostensibly loyal to Bamako, analysts say he is unlikely to take direct orders. Many believe that even though President Ibrahim Boubacar Keita’s government has condemned the occupation of Anefis, it is quite happy to allow GATIA to do its dirty work in the north.

“The government doesn’t want peace in the north,” said Keenan. “It wants its own back on the rebels and is thanking its lucky stars GATIA is there.”

“PRISONERS IN THEIR OWN VILLAGES”

Worsening security in the north is slowing the return of the army and government officials who have been forced to leave Kidal. MINUSMA, seen as a soft target for Islamist militants, has camps in major towns but a weak presence in the desert.

Aid workers are struggling to deliver help to the more than 3 million Malians deemed food insecure, including tens of thousands displaced by fighting.

“People are prisoners in their own villages,” said Eric Bertin Mukam, a human rights officer with MINUSMA in Gao.

Despite more than 3 billion euros in aid pledged for reconstruction at Keita’s election in 2013, the streets of Gao are so full of potholes that cars take a parallel dirt track.

Kidal’s airport runway is shut because it is heavily mined, security sources say.

MINUSMA is implementing a series of “rapid impact projects” to improve infrastructure, access to healthcare and electricity.

But many are not seeing the effects.

“I don’t know who my state is,” said Farock Ag Foukana, deputy mayor of Talataye, near Gao. “I haven’t seen any authorities. Since 2012, there is nothing.”