You are here: Home / MidEastGulf / Civilians in Raqqa show defiance by burning and cutting symbols of Islamic State 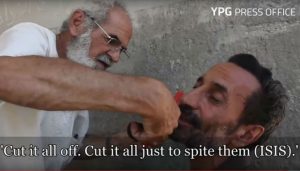 Syrian women celebrated being freed from Islamic State (IS) rule by burning their burqas, while men shaved their beards off in defiance of their captors, like reported by newshub.co.nz.

The civilians were liberated from the northern city of Raqqa by US-backed forces, and video from the People’s Protection Units (YPG) shows the celebrations afterwards.

One woman, clutching her children and crying, says IS killed her husband and her father with mortar fire at their house.

Another pulls off her burqa and cries: “Give me a lighter, I’m going to burn this!”

“Burn these!” shouts another. “May Allah burn them (IS)! They burned my father!”

“May Allah put fire to their hearts!”

“They killed my son because he wouldn’t pray,” another woman says in the YPG footage.

“They didn’t allow us to take his body for a whole week.”

Some of the men shaved off their facial hair in protest at their treatment.

One man says: “Cut it all off. Cut it all just to spite them.”

The military units who freed the civilians in Raqqa were mainly made up of Kurdish fighters, known as the Syrian Democratic Forces (SDF).

Fighting continues in Raqqa, while IS has been defeated in its main stronghold in the city of Mosul.