You are here: Home / Mediterranean / Civil war in Libya: forever at loggerheads

After one year in office, Libya′s Government of National Accord is on the verge of collapse. While its ministers are trying to maintain order in the capital, the armed opposition is challenging them for strategic positions. At the same time, the government is involved in a proxy war with the East Libyan army. Valerie Stocker (qantara.de) reports from Tripoli 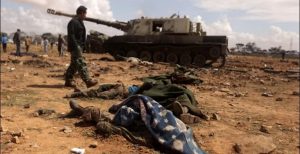 Deep-pile carpets, gilded armchairs and sparkling chandeliers are ready and waiting for the official opening of the VIP lounge. Outside, in front of Tripoli International Airport, the red carpet has been rolled out. It is the eve of 17 February 2016 – the anniversary of the 2011 revolution that toppled long-time ruler Muammar Gaddafi. ″The renovation is almost complete; in March we can put the airport back into service,″ promises ex-premier Khalifa Ghwell in front of a cheering crowd. It could have been a good day for the people of Tripoli, but the airport is in opposition territory and the actual government can do little else than watch from its headquarters 20 kilometres further into the city.

The airport was reduced to rubble during fighting in 2014 and is a shameful symbol of the conflict that has been raging in Libya since. Following parliamentary elections in 2014, the power struggle escalated and armed groups scrambled to control the capital. Subsequently, the country split along territorial lines under first two, then three rival governments. Parliament has been sitting in Tobruk, more than 1000 kilometres east of the capital. The Government of National Accord, formed under UN oversight, has been based in Tripoli since March 2016, but is not recognised by its predecessors.

Ghwell represents the Islamist “National Salvation Government”, which stood down a year ago. Now he and his allies want a return to power. The renovation of the airport is intended to embarrass the unity government. But the latter is trying to ignore this political manoeuvre. Transport minister Milad Matouq is unimpressed. “We have our own plans. We′re on the verge of signing a contract with an Italian consortium for the construction of a provisional terminal,” he explains. The minister is hoping for lasting investments and long-term partnerships with Europe.

Division rather than unity

The EU needs a reliable partner, too – above all, to slow the stream of migrants across the Mediteranean. But Prime Minister Faiez Serraj and his Presidency Council, the core of the unity government, have little control over the country despite Western backing.

In fact, the peace agreement signed in December 2015 under UN oversight did not create any basis for unity. The leadership of the East Libyan army, under General Khalifa Haftar, refuses to co-operate with Serraj. The army has widespread support among the population in the East and respect for the unity government is correspondingly low there.

Parliament is split and the majority of representatives who still attend the sessions in Tobruk are on the army′s side. As a result, the peace agreement and the unity government have not been ratified as planned. Instead of by Serraj, the East is governed by Abdallah al-Thinni, prime minister of the so-called Interim Government.

Hopes that the signatories to the peace agreement, who were prepared to compromise, could each persuade their camp to back down, were dashed. Instead, hardliners are setting the rules of the game. This can be seen in the battle for Libya′s most important oil ports, which reignited at the start of March. Haftar′s army was forced to retreat under a surprise attack by the “Benghazi Defence Brigades” (BDB). The Islamist BDB has links to the Salvation Government and to the city of Misrata – the largest military force in Western Libya and an important buttress to the unity government.

The unity government may not have taken any official responsibility for the attack, but it did immediately dispatch its oil guard to take over the ports from the BDB. The defence minister is said to have given the BDB the green light and the Presidency Council′s Islamist members have hailed the group as “revolutionaries”.

The pendulum has since swung back, as Haftar′s troops regained control of the oil terminals last Tuesday (14/03/2017).

In Tripoli, the unity government′s initial popularity has dwindled. The capital is experiencing periodic electricity and water shortages and a prolonged liquidity crisis is limiting people′s access to salaries. Violent crime is also on the rise. Each district is guarded by different militias and clashes are frequent.

Without an army, the government is reliant on the co-operation of allied brigades. But the allocation of security assignments is not always without conflict. This has manifested itself at Mitiga airbase, to which all flights were redirected after the destruction of the airport. Several militias share the policing of the airbase. As a rule they operate peacefully, though in the past there have been altercations, including with heavy weaponry. It is also an open secret that one or another of the brigade chiefs uses the airbase for smuggling business.

Transport minister Milad Matouq assures us that the government is working on the problem. “The Mitiga brigades will be part of the National Guard”, he says. The National Guard, announced in September, is to guarantee the security of institutions and border crossings and form the core of a future army.

Since then, however, the rival Salvation Government has managed to storm several government buildings and set up its own “National Guard”. “The Government of National Accord has made the situation worse and encouraged corruption,” Ghwell recently told the local press. “This compels us to return to our ministries.” This is likely to provoke more violence. Last month, Prime Minister Serraj′s convoy came under fire as it drove through the capital. Members of the government accused Ghwell′s people of being behind the attack. Last week, heavy clashes between forces allied with the unity government and others allied with Ghwell rocked the capital.

The failure of the Presidential Council

The Presidential Council is too weak politically to rise to the challenges in Tripoli. Of its original nine members, only eight remain, as the South Libyan representative, Musa al-Koni, has stepped down. His colleague Ali al-Gitrani represents Haftar′s interests and attacks the council′s decisions.

The other Council members are also hopelessly disunited. “The delegates are at odds over how they want to govern the country. And this isn′t just about policy issues; it′s also about their egos,” says Belgasem Gzit, who was one of the signatories to the peace agreement. But in his view, there is still hope. “A legitimate government ratified by parliament would stand up to their adversary Ghwell – even without a large fighting force,” the politician told Qantara.de in an interview in his home city of Misrata in February.

But for the time being this is a far-off prospect: the escalation at the oil ports allowed the pro-Haftar faction in parliament a breakthrough. In a vote on 7 March, parliamentarians declared the Presidential Council illegitimate. The head of parliament is now suggesting that new elections be held in the coming spring.

The representatives of the EU states continue to stand by the peace treaty and the unity government, seeing them as the “only way out of the crisis”. Italy′s special envoy to Libya, Giorgio Starace, dismissed the vote in Tobruk. “There was no quorum – the parliament still isn′t working,” he said from Rome. He also welcomed the takeover of the oil ports “by the unity government.”

International stakeholders still hope that Haftar can be persuaded to negotiate with Serraj. Even Haftar′s foreign allies, Russia and Egypt, have been trying to broker peace talks. Just what a power-sharing agreement might look like is unclear. The lowest common denominator, however, is the wish to prevent a full-blown civil war and the further disintegration of Libya.