You are here: Home / MidEastGulf / Christians used as ‘form of currency’ by ISIS as mass kidnappings continue 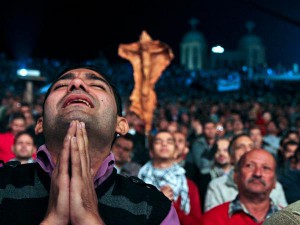 Christians in the Middle East still live in fear as the Islamic State (ISIS/ISIL) remains unchallenged in Iraq and Syria. Christian organizations are attempting to help Christians, but for many, it is too late.

“Christians have become a form [of] currency in this tragedy,” explained John Newton, spokesman for Aid to the Church in Need, to the Christian Post. “I know of one priest who was kidnapped for two months… they asked for a ransom of $120,000, which the family managed to raise and deliver… But hours later, the priest was killed and his body cut up, with pieces of him sent in a box to the family.”

“No one knows who took the archbishops, nor what their fate was, but the two priests they were trying to free have since been executed,” said Newton.

ISIS kidnapped at least eight clergymen in the past year. They captured Father Tony Boutros in July. Militants kidnapped Father Jacques Mourad at the Mar Elyan Monastery, 62 miles from Palmyra, in May.

In July, Pope Francis pleaded with ISIS to release Father Paolo Dall’Oglio. Militants kidnapped him in Syria on July 29, 2013.

“In a few days, we will mark the second anniversary since, in Syria, Father Paolo Dall’Oglio was kidnapped,” the pope said. “I make a heartfelt and urgent appeal for the freedom of this esteemed religious man.”

Father Douglas Bazi described his experience to the BBC for their “Kill the Christians” documentary. Terrorists “struck his back, broke one of his legs, shot him, punched his teeth out, and deprived him of water for four days until a ransom was paid.” However, it did not keep him down, and he remained in Iraq. He opened the Mar Elias Centre in north Iraq where he now “cares for around 135 Christian families.”

“We are Christian, so we are used to having our luggage always prepared. We always have to run away, escape from place to place,” he said.

Mosul, Iraq, housed one of the largest Christian communities in the world. But due to ISIS, Iraq’s second largest city is without Christians for the first time in 2,000 years. ISIS told Christians to convert to Islam, pay a protection tax, or die. Witnesses described how the terrorists slaughtered the males in front of everyone while they kidnapped the females for sex slavery. Andrew White, the vicar of the only Anglican Church in Iraq, told BBC Radio 4 that Christianity is coming to an end in the Middle Eastern country.

“Things are so desperate, our people are disappearing,” he said, adding:

We have had people massacred, their heads chopped off. The Christians are in grave danger. There are literally Christians living in the desert and on the street. They have nowhere to go. Are we seeing the end of Christianity? We are committed come what may, we will keep going to the end, but it looks as though the end could be very near.

White hopes the United Kingdom does not forget about the Christians in Iraq.

“We do not want Britain to forget us. We – and I’m saying ‘we’ talking like an Iraqi Christian – have always been with the British because they have already been with us,” he said. “Individual churches, individual Christians in Britain, have been a bigger help than anybody around the world.”

There were a million Christians in Iraq prior to 2003, but there are now fewer than 500,000. It is unknown if they can ever return. After forcing out the Christians, ISIS blew up Jonah’s tomb and imposed Sharia law in Mosul. The women must now wear full-face veils, perfume is forbidden, and the shops must place veils on all mannequins. According to the U.N., ISIS even ordered female genital mutilation, but ISIS denies the allegation.