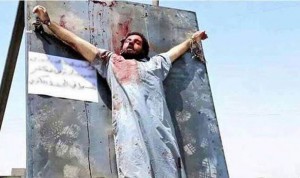 According to Jean-Clement Jeanbart, a Catholic archbishop in the city, Syrians are “feeling relaxed” about Moscow’s air strikes.

He said people were “generally feeling positive” about the Russian pounding of ISIS targets, saying it gave them fresh hope of an end to the four-year civil war.

He added: “Things have begun to change since the Russians are bombing ISIS.”

The archbishop, who has warned about the threat of a Christian annihilation at the hands of jihadi factions, also called on the British government to intervene militarily.

He said: “Please, I ask you, I beseech you to have another look at our situation to see what is underneath, what is happening.

“It is terrible for us to see all the marvellous things we had destroyed for pretend democracy and freedom. Our country was fighting for 50-60 years to become a secularist regime, a pluralistic country, to give citizens their rights of religion and freedom of choice … and you are destroying this work and pushing on us fundamental jihadis who want to kill everyone who is not similar to them.”

Archbishop Jeanbart also described as a “big lie” the notion that Syrian rebels were battling President Bashar al-Assad to bring about democracy and greater freedoms for civilians.

“My colleagues — bishops, priests and faithful — in Syria now feel they have hope that the problems will be sorted and the war will finish since Russia intervened and struck Daesh [ISIS] seriously,” he said.

“That is what they think.”

He added: “The recent Russia action is a clear demonstration of the Assad regime’s weakness.

“Assad cannot survive without Russian or Iranian support, and Assad cannot win the war in Syria.

“We don’t buy for one moment his spurious argument that he can protect religious minorities.

“His actions in effect have fuelled sectarian violence, and his regime is ultimately responsible for the deaths of hundreds of thousands of civilians, and as long as Assad is in power the conflict will go on.”

Only about 14 per cent of Russians are against the airstrikes in Syria, according to a Russian poll conducted at the beginning of October.

Mr Putin’s aerial bombardment has taken out 600 ISIS and an unknown number of Western-backed rebels.