You are here: Home / MidEastGulf / Christians fight back against ISIS’s Islamic War 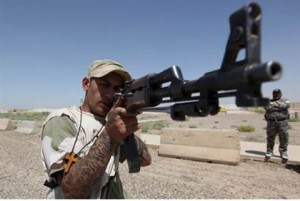 With wooden crosses around their necks and others tattooed on their arms, several dozen Iraqi Christians are training to recapture their homes overrun by the Islamic State (ISIS) jihadist group.

A year ago, ISIS launched a fierce offensive in northern Iraq, quickly capturing second city Mosul, with its large Christian minority, and Christian-populated areas in the surrounding Nineveh province.

Residents were given the choice of converting to Islam, paying a tax to continue practicing their faith, or death.

Thousands fled, but some want to fight back, and are now training at a military base near the Baghdad airport.

They have Shi’ite Muslim fighters instructing them on how to use their Kalashnikov assault rifles and on the basics of combat maneuvers, but they are vocal in their Christianity on parade, chanting “Ya Mariam (O Mary)” in cadence as they march in a salute to the mother of Jesus.

“We heard that the Christians had an opportunity for jihad (holy war), and we all came and volunteered,” said 17-year-old Chaldean Christian Frank Samir.

“Our children are dying; our Christian families were displaced. How do we ourselves accept that people say the Christians are not fighting? On the contrary, we want to fight everywhere,” he said.

Samir is from Baghdad, but most of the Christians in the “Ketaeb Babylon” unit are from Mosul.

The ISIS assault was the latest in a long series of disasters for Iraqi Christians, who have repeatedly been attacked by jihadists since the 2003 overthrow of dictator Saddam Hussein, pushing hundreds of thousands to flee abroad.

“I did not hesitate to volunteer with my brothers to fight Daesh,” said Fares Issa, 38, using an Arabic acronym for ISIS.

“I will continue fighting (them) until the liberation of Mosul and their expulsion from all the areas of Iraq,” said Issa, who sold cars in Mosul before the conflict began.

Both Christian and Muslim religious symbols are displayed at the training area. These include a large cross affixed to a concrete blast wall and banners reading “Allahu Akbar” (Allah is greatest) and “There is no God but Allah,” the first part of the Muslim testament of faith.

The training courses – of which this is the ninth – last only two weeks.

But this is far too little time to turn new recruits into competent fighters able to face the battle-hardened jihadists, many of whom have years of experience fighting in Iraq and neighboring Syria.

“The main aim of forming our forces is the liberation of Mosul,” said Rayan al-Kaldani, the secretary general of Ketaeb Babylon.

“We took part in the operations to liberate the city of Tikrit and other operations, including Baiji, in Salaheddin province,” he said, referring to major battles north of Baghdad.

According to Kaldani, the Christians fight under the command of Abu Mahdi al-Mohandis, one of the top commanders in the “Popular Mobilization” forces, an umbrella organisation mainly made up of Shi’ite fighters.

Baghdad turned to the Popular Mobilization forces, which are dominated by Iranian-backed Shi’ite Islamist militias, after the security forces suffered a series of disastrous defeats by ISIS last year.

The force has come under criticism for its sectarianism, and a steadily rising list of atrocities committed against Sunni Muslims.

According to another Ketaeb Babylon commander, who declined to be named, there are “hundreds of Christian fighters located now in various areas of Salaheddin…in addition to others responsible for protecting churches in Baghdad province.”

Recruitment of other volunteers to “fight the Daesh terrorist organisation” is continuing, he said.

A man who gave his name as Hajji Ali, a leader of one of the Shi’ite units overseeing the training, said it “focuses on close-quarters combat, unconventional warfare and war inside the cities.”

“Their eyes are on Mosul and the areas occupied by Daesh,” Hajji Ali said of the Christian fighters.

The volunteers say Mosul is the main goal, but their fight is not limited to that city.

Mosul “is our first aim,” said 16-year-old Raymoun Salwan, who was displaced from the city.

But “I will continue to fight terrorism wherever it goes in Iraq and every place,” he said.