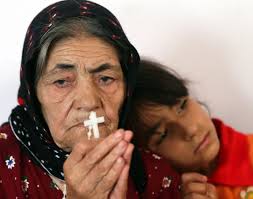 Islamic State’s daily abductions, murders and beheadings on Christians have come close to wiping out the faith completely in Syria, a senior archbishop in the war-ravaged country has warned.

An existential crisis is now facing Christianity in Syria as thousands have been wiped out by assassinations and lone-wolf attacks by crazed Islamic militants.

The stark assessment of life for the persecuted religious minority under ISIS control comes from Jean-Clement Jeanbart, the Greek Melkite Catholic Archbishop of Aleppo.

He has narrowly avoided death TWICE, but vowed never to leave his homeland.

He bravely told how he is willing to die at the hands of ISIS to defend the Christians in Aleppo.

His besieged north Syrian city, which is under the control of President Bashar al-Assad but surrounded on all sides by ISIS and anti-Government rebels, is gearing up for a fierce battle in the coming days.

Describing the daily onslaught of sheer horror, he exclusively told Express.co.uk: “If nothing is done, it is not impossible that all the Christians in Syria may be wiped out.

“If ISIS comes back we may be in danger of losing everything.

“There is a fundamental threat to Christianity from ISIS. They have killed plenty of us. There is an existential crisis.”

The archbishop revealed at least 1,000 Christians had been abducted and murdered in the city, decimating the congregation, which now numbers less than 100,000.

Before the war, it had a Christian population of around 160,000, one of the biggest in the Middle East.

Among those targeted were two of Archbishop Jeanbart’s bishops and three of his priests, who disappeared without trace two years ago.

“They do not accept anyone different. Anyone who is not like them and with the same choices has not got a right to live.”

He said Christians had called Syria home for at least 2,000 years, and his ancestors’ links to the country stretched back almost 7,000 years.

He added: “It is very sad and they are desperate and scared about the future, we hope that this war will end soon so we can continue to remain in this country, which is our country, where are ancestors are laying, and where we have been for 2,000 years.

“We belong to all this history and all this civilisation. “

Archbishop Jeanbart has been in London to press the need for help from the West to defeat the depraved terror network, which has gained control of vast swaths of Syria and Iraq.

But he insisted he would return to Aleppo this week – even if that meant he was returning to his death.

He explained: “I am going back to Aleppo, it is my country.

“I am responsible for the Christians, I have to stay beside them and I will never leave them alone. A good shepherd never leaves his sheep.”

The UN estimates 35,000 people have been displaced by fighting around Aleppo.

Rebels battling the Syrian army and its allies near Aleppo have received new supplies of US-made anti-tank missiles following the start of a major government offensive last week, which is backed up by Russian air strikes and on the ground by Iranian fighters and Lebanon’s Hezbollah.

But the city is fast running out of water, electricity, oil and medicine, according to the Archbishop.

He said he is ready to sacrifice his own life for the love of God and his religion, and has come close to losing his life twice.

In one attack his car was ambushed by an armoured van carrying Islamist rebels on a road leading from Aleppo.

In another, his house was bombed, causing his secretary to need six rounds of surgery and to lose an eye.

He added: “I would sacrifice my own life to be in Syria. It is the first church in the world. Like the captain of a ship, I won’t leave until everyone is safe.

“I am preoccupied [by the threat to my life] but I try not to think about it and do what I can to encourage other people to stay, to remain, to persevere. This is my fight, this is my struggle.”