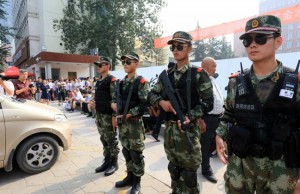 Police at a train station in the northwestern Chinese city of Xian shot and wounded an ethnic Uighur man who had charged into a ticket line holding a brick, police said on Wednesday, adding the man later died of his injuries.

Public sensitivity to security at China’s railway stations has heightened following a series of incidents including a mass stabbing at a train station last year in the southwestern city of Kunming that left 31 dead.

Authorities said that was carried out by separatist militants from the far western region of Xinjiang, home to the Muslim Uighur people.

In a brief statement on its official microblog, the Xian railway police said that at about 6 a.m. a Uighur man holding a brick “charged into” a line of people waiting to buy tickets.

“On duty police quickly got to the scene to stop [him], and after repeated warnings were ignored opened fire and injured [him],” it said.

The man died of his wounds in hospital, police said, adding the situation had already returned to normal at the station.

The statement provided no other details.