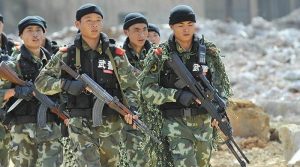 A mystery over recent sightings of Chinese military vehicles patrolling inside Afghanistan deepened last week as Beijing denied its troops were in Afghanistan but confirmed it was undertaking “joint counter-terrorism operations” with Kabul, like reported by ft.com.

The disclosure comes as China steps up its involvement with its western neighbour amid a gradual withdrawal by US forces from the war-ravaged country. Ren Guoqiang, a spokesman for the People’s Liberation Army, was asked about reports of Chinese troops inside Afghanistan at a defence ministry press conference on Thursday.

He flatly denied any military involvement but said that “the law enforcement authorities of the two sides have conducted joint law enforcement operations in border areas to fight against terrorism”, according to an official transcript of the remarks made available Friday. “The report that the Chinese military patrolled in Afghanistan is false,” he said. An effort Friday to clarify whether there were any Chinese non-military patrols on the Afghan side of the border was met with the same response.  Col Ren was referring to a number of witness reports and photos appearing to show Chinese military vehicles patrolling inside Afghanistan in recent months.

The first photos were published on November 3, when Wion, an Indian news website, reported the presence of Chinese military vehicles in the Wakhan corridor, a mountainous strip of land between the Pamir and Karakoram mountain ranges that extends all the way to the border with China.

In February, the Central Asia-Caucasus Analyst, a think-tank, published a report citing “overwhelming evidence” including statements of diplomats, as well as an unnamed Chinese official, that Chinese troops were patrolling inside Afghanistan, though the article also cited a denial by Sediq Sediqi, a spokesman for Afghanistan’s ministry of internal affairs. Justin Bronk, an analyst at the Royal United Services Institute in London, said a denial by Beijing that the Chinese military was involved might not rule out a military-style operation by police. “Clearly in a place like Afghanistan, law enforcement and military patrols are rather blurred terms” he said.

He said published photos of the alleged patrols showed two types of Chinese vehicles — the Dongfeng EQ 2050, similar to the US Humvee, and the Norinco VP 11, a mine resistant vehicle. Both are military vehicles, said Mr Bronk, but could be used in a law enforcement capacity. If an agreement on joint patrolling exists, it would not the first such arrangement of extraterritorial law enforcement that China has with a border state.

Since December 2011, China, Laos, Myanmar and Thailand have completed dozens of joint police patrols on the Mekong river, aiming to crack down on crime in the region. Those patrols follow the brutal murder of 13 Chinese sailors on a stretch of the Mekong by suspected drug smugglers in Oct 2011. The motivations for China to deepen its involvement in Afghanistan are several. Beijing fears contagion from Islamic extremism, while Chinese companies also hold key mining and hydrocarbons concessions across Afghanistan.

“China’s main focus is counter-terrorism,” said Andrew Small, an expert on China at the German Marshall Fund. He added that the Turkistan Islamic Party, a separatist organisation that China has linked to terror attacks, was believed to have its headquarters in Badakhshan, the Afghan province neighbouring China. Often accused of being a “free rider” that benefits from the security provided by US forces in Afghanistan, China has also been forced to respond to the likelihood of an eventual US withdrawal from the country.

“It’s impossible to see what China is doing outside the context of the US drawdown, which forced China, reluctantly, to face up to the fact that it will have to take on greater responsibility for security in its western periphery,” said Mr Small. In 2014 former US President Barack Obama announced that US forces would leave Afghanistan by the end of his term in office, though due to the worsening security environment 8,400 have stayed on since a partial drawdown was completed in December.