You are here: Home / Mediterranean / China’s military vessels for Syria to join Russia 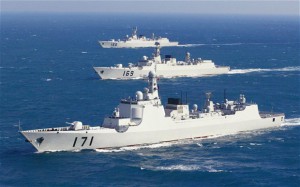 Earlier this week, Chinese naval vessels have traveled through Egypt’s Suez Canal and entered the Mediterranean Sea. According to a senior officer in the Syrian Arab Army, and confirmed by a Russian Senator, the naval vessels are headed for Syria’s Port of Tartus, and that “China has joined [Russia’s] military operation in Syria.” The reports indicate that the Chinese vessels will reach Tartus within six weeks. No explanation is given for the long time frame.

From the point of view of Generational Dynamics, Chinese military cooperation with Russia in the Mideast is strongly counter to the predicted trends. As long-time readers are aware, the prediction is that the US and China would be the principal enemies in the approaching Clash of Civilizations world war, and that the US would be allied with India, Russia and Iran, while China would be allied with Pakistan, Saudi Arabia and other Sunni Muslim countries.