You are here: Home / Africa / China to send 395 peacekeepers to Mali 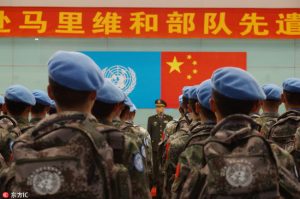 China will dispatch 395 peacekeepers in May to Mali for one year on a UN mission.

Officially formed on Wednesday, the battalion will be China’s sixth batch of peacekeepers to be deployed in Mali.

They will take on tasks such as repairing roads, bridges and runways in mission areas, protecting the headquarters in war zones, and treating the sick and wounded.