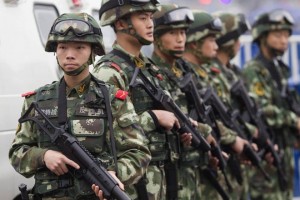 Chinese police have shot dead three “violent terror” suspects in the western Xinjiang region, the government says, the latest clash with Islamist militants who the government says want to break the region away from China, according to sbs.com.au .

The government says separatists in Xinjiang, home to the Muslim Uighur minority, aim to form their own state called East Turkestan, and have links with militants abroad, including in Asia and the Middle East.

“We shot the thugs dead at the scene. There were no casualties on our side,” the government said on Monday.

The suspects were wanted in connection with an incident in April 2015, it said, but did not give details.

Hundreds of people have been killed in recent years in resource-rich Xinjiang, on the borders of central Asia and Pakistan, in violence between Uighurs and ethnic majority Han Chinese.

The government has blamed the unrest on militants, though rights groups and exiles say anger at Chinese controls on the religion and culture of Uighurs is more to blame for the violence. China denies any repression in Xinjiang.

Xinjiang had been generally quiet in recent months, with no major violence reported.

But in December, state media said attackers drove a vehicle into a government building in Hotan, setting off an explosive device and killing two people with knives before all three assailants were shot dead.

The government has delayed reporting some previous incidents in Xinjiang and limits on foreign journalists working there make it almost impossible to reach an independent assessment of the region’s security.

An attack on a coal mine in September 2015, in which at least 16 people were killed, was not reported by the government for two months.

It then announced its security forces had killed 28 of the “terrorists” involved.