You are here: Home / West Asia / China seeking to expand influence in Muslim-majority regions in response to Islamic State threats

Beijing plans to expand its influence across the Middle East and other Muslim-majority regions in response to a propaganda video purportedly showing Islamic State (ISIS/ISIL)-linked jihadists threatening to attack China, Voice of America (VOA) has learned from some analysts, like reported by breitbart.com 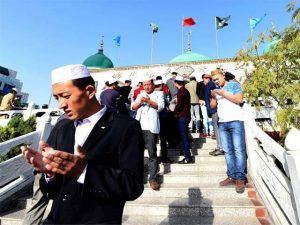 The report comes in the same month that Chinese officials vowed to crack down on the growing threat that Islamic extremism poses to their country, condemning “jihad, terror, and violence.” The Islamic State has particularly recruited among the Chinese Uighur minority group.

“This year at least two potential attacks so far and a number of other odd incidents taking place,” Raffaello Pantucci, an analyst from Britain’s Royal United Services Institute, told VOA. “And we’ve seen the governor in Xinjiang province actually having a very heavy clampdown and a very visible escalation of the security presence in the region, all of which suggests that China is increasingly concerned about the problems related to terrorism and extremism, and clearly IS is part of that picture.”

“China wants support from Western states on its policies in Xinjiang. China considers that the anti-terror efforts that it is leading in Xinjiang are not being endorsed by countries in the West and the response in Europe at least is that there is a lack of transparency,” added Mathieu Duchatel of the European Council on Foreign Relations.

“China has a category which it calls the three evils. Terrorism, extremism and separatism are put together in the same basket,” Duchatel also told VOA.

In late February, the ISIS terrorist group released a propaganda video featuring members of the Uighur Muslim minority vowing to carry out attacks on Chinese soil.

“Soon the black flag of Tawhid [Unity of Allah] will be hanging in the capital cities of the United States, Russia, and China,” declares a Chinese Uyghur jihadist in the ISIS video.

“Oh, you Chinese, who do not understand what people say! We are the soldiers of Allah, will make you understand Islam with the tongues of our weapons. We will come to you to shed blood like rivers and avenge the oppressed,” he adds before beheading a prisoner dressed in red, a color traditionally linked with communism.

ISIS has threatened China in the past.

In January 2016, the jihadist organization noted in its online propaganda magazine Dabiq that the presence of “atheist Chinese” near China’s border with Afghanistan represents an impediment to their terrorist goals.

ISIS highlighted the strategic importance of the central Asian region, identified as “Khorasan,” to their international jihad.

The Sunni terrorist group established a wing in the Af-Pak area at the beginning of 2015.

ISIS named its central Asian offshoot “Khorasan,” an ancient name for a region that covers Afghanistan, Pakistan, and other neighboring countries.

China has deployed ground military troops to Afghanistan and maintains a close relationship with Pakistan.

“Islamic State may be a common enemy, but there has been little coordination between China and the global coalition fighting the group,” indicated Duchatel.

Besides ISIS, the Turkistan Islamic Party (TIP), an al-Qaeda-linked group mainly made up of ethnic Uighurs, also poses a threat to China.

The al-Qaeda linked group has advertised its training camps in the Afghanistan-Pakistan area, according to the Long War Journal (LWJ).

Taking a page from its rival ISIS’s playbook, TIP also released a video in late February calling on ISIS-affiliated jihadists from China’s Uighur minority to attack the communist country.