You are here: Home / Senza categoria / China says (at the moment) not planning to send military forces to Syria 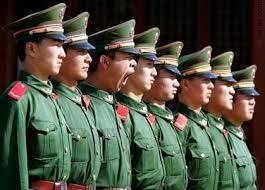 China said on Wednesday it had no plans to send its military to Syria to fight with Russian forces after reports in overseas media that it was planning to do so.

Chinese media has picked up Russian and Middle Eastern news reports that China would fight alongside Russia in Syria, and that China’s sole aircraft carrier, the Liaoning, could participate too.

Chinese media has also described these reports as speculative nonsense.

“As far as I know there are no such plans,” Foreign Ministry spokeswoman Hua Chunying told a daily news briefing, when asked if China had or would send forces to Syria. “Recently, the Liaoning aircraft carrier went to carry out technical tests and military drills,” she added, without elaborating.

Russia last month began air strikes on targets in Syria in a dramatic escalation of foreign involvement in the civil war. This has been criticised by the West as an attempt to prop up Syrian President Bashar al-Assad, rather than its purported aim of attacking Islamic State.

The United States and its allies have also been carrying out air strikes in Syria against Islamic State, and have supported opposition groups fighting Assad.

The Liaoning is generally considered by military experts to be a training carrier, while China builds its own carriers and works out how to operate them.

China’s Defence Ministry said it had nothing to add to Hua’s comments.

The Global Times, an influential tabloid run by the ruling Communist Party’s official People’s Daily, said in an editorial on Wednesday it was “unfounded rumour” that China would interfere militarily in Syria.

“It’s not China that brought chaos to Syria, and China has no reason to rush to the frontlines and play a confrontational role,” it said.

While China generally votes with fellow permanent United Nations Security Council member Russia on the Syria issue, it has expressed concern about interference in Syria’s internal affairs and repeatedly called for a political solution.

China, a low-key diplomatic player in the Middle East despite its dependence on the region for its oil, has warned many times military action cannot end the crisis.