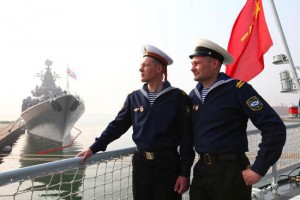 “The purpose of the exercise is to strengthen the friendly exchanges between the two sides … and to improve the capability of the two navies to deal with maritime threats,” Geng said. He said the drills did not target any third parties and were not a response to fighting and instability in places such as Libya and Syria, he said.

China and Russia frequently align on major international issues and Beijing has refused to join in the condemnations and economic sanctions leveled against Moscow for its backing of the Ukrainian rebels.

In a further show of support, Chinese President Xi Jinping plans to attend commemorations of the 70th anniversary of the end of World War II in Moscow on May 9. Most Western leaders are staying away from the event featuring a massive military parade, in which a 112-strong honor guard from the Chinese army, navy and air force will also take part.

The two nation’s militaries have increased their joint training operations in recent years, sometimes under the aegis of the Shanghai Cooperation Organization, a regional grouping formed partly to counter U.S. influence in Central Asia.

China has also looked to Russia for support in its perpetual feud with archrival Japan over World War II history and the shifting balance of power in Asia.

In other remarks Thursday, Geng harshly questioned a revision of the U.S.-Japan defense guidelines that will allow Japan’s military to play a bigger role in global military operations and work more closely with U.S. forces.

“A military alliance is an outdated product that goes against the trend of the times characterized by peace, development, cooperation and win-win,” Geng said.

“What kind of impact will it have on world and regional peace and stability to beef up the U.S.-Japan military alliance and expand their defense cooperation to the whole world? This is a question that needs to be asked by all sides,” he said.

The latest drills with Russia are a further extension of China’s drive to build a true “blue water navy” able to operate for long periods and at vast distances from home ports.

China’s navy began expanding its reach toward the Mediterranean in 2008, when it first sent ships to join in the anti-piracy patrols.

In 2011, it took the unprecedented step of sending one of its most sophisticated warships together with military transport aircraft to help in the evacuation of about 35,000 Chinese citizens from Libya. Early this April, China detached three navy ships from the anti-piracy patrols to rescue Chinese citizens and other foreign nationals from fighting in Yemen.