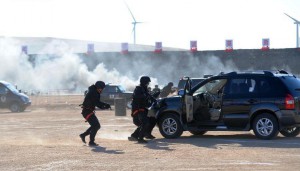 While Russia is intensifying its campaign against the ISIS terrorist group operating in Syria through airstrikes, Chinese people have joined state media in praising Russian President Vladimir Putin’s resolution.

The general pro-Russia sentiment of the Chinese public is a reflection of the good relationship between the two countries expressed through the China-Russia Comprehensive Strategic Cooperative Partnership.

Speaking in Beijing last Thursday, Vladimir Yakunin, doctor of political science at Moscow State University, said such synchronization extending from top leaders down to the general public of the two countries is important in the world effort to counter terrorism. China and Russia often coordinate their activities in the UN Security Council Syria and anti-terrorism issues, he noted.

“This collaboration between China and Russia is vital,” he said while addressing students at China’s prestigious Peking University. Yakunin is also the founding president of the World Public Forum “Dialogue of Civilization.”

“Our operations in Syria are not to show how mighty Russia is. It is essential to understand that if we do not cooperate today, terrorism will appear every day at every door in every country, regardless China, USA, Russia or European countries,” he declared.

He criticized the U.S.-led Western alliance for launching campaigns to topple a “so-called dictatorship,” only to result in “complete disorder, disturbances and rise of terrorism” in countries such as Iraq, Afghanistan, Libya and Syria.

“In Libya, who is concerned about what is going on there now, and who is concerned about the militants that went to Iraq,” Yakunin asked. He signaled that the West should be mainly responsible for deteriorating situations in those war-torn countries plagued by terrorism. “No one cares about who is working with terrorists inside China and Russia,” he added.

According to this theory of the “Dialogue of Civilizations,” regional conflicts in the world now, as well as intensifying terrorist networks such as the ISIS, are more likely to be caused by geopolitical and geo-economic reasons, rather than civilizational contradictions.

Although the strategy of dialogue has become a regular practice in the field of international relations, in the practice of dialogues, economically and politically powerful states tend to impose their own rules, that is to exercise their dictate under the guise of “dialogue,” he warned.