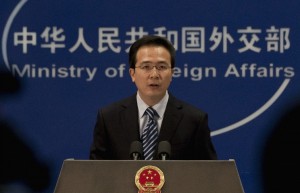 China is ready to join the international fight against any forms of terrorism, China’s Foreign Ministry spokesperson Hong Lei told a regular news conference while commenting on information in some media about Chinese warships near Syria being ready to take part in a mission against the Islamic State (IS) terrorist organization.

“Terrorism is the enemy of mankind,” he said. “China is against terrorism in all of its forms and is ready to apply efforts for fighting terrorist forces jointly with the international community. This position of China remains unchanged.”

However, the spokesman could not confirm information about Chinese warships near the Syrian coast being ready to patrol the region.

“As for the situation you are asking about,” he told the reporter who asked the question, “I do not have that information.”