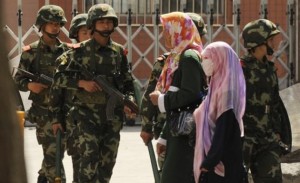 Chinese authorities have ordered Muslim shopkeepers and restaurant owners in a village in its troubled Xinjiang region to sell alcohol and cigarettes, and promote them in “eye-catching displays,” in an attempt to undermine Islam’s hold on local residents, Radio Free Asia (RFA) reported. Establishments that failed to comply were threatened with closure and their owners with prosecution.

Facing widespread discontent over its repressive rule in the mainly Muslim province of Xinjiang, and mounting violence in the past two years, China has launched a series of “strike hard” campaigns to weaken the hold of Islam in the western region. Government employees and children have been barred from attending mosques or observing the Muslim fasting month of Ramadan. In many places, women have been barred from wearing face-covering veils, and men discouraged from growing long beards.

In the village of Aktash in southern Xinjiang, Communist Party official Adil Sulayman, told RFA that many local shopkeepers had stopped selling alcohol and cigarettes from 2012 “because they fear public scorn,” while many locals had decided to abstain from drinking and smoking.

The Koran calls the use of “intoxicants” sinful, while some Muslim religious leaders have also forbidden smoking.

Sulayman said authorities in Xinjiang viewed ethnic Uighurs who did not smoke as adhering to “a form of religious extremism.” They issued the order to counter growing religious sentiment that was “affecting stability,” he said.

“We have a campaign to weaken religion here, and this is part of that campaign,” he told the Washington-based news service.

The notice, obtained by RFA and posted on Twitter, ordered all restaurants and supermarkets in Aktash to sell five different brands of alcohol and cigarettes and display them prominently. “Anybody who neglects this notice and fails to act will see their shops sealed off, their businesses suspended, and legal action pursued against them,” the notice said.

Radio Free Asia, which provides some of the only coverage of events in Xinjiang to escape strict Chinese government controls, said Hotan prefecture, where Aktash is located, had become “a hotbed of violent stabbing and shooting incidents between ethnic Uighurs and Chinese security forces.”

Critics say China’s long repression of Uighur rights and nationalist sentiment has pushed people toward Islam as the only permitted assertion of their community’s identity, and pushed a minority toward a violent form of Islam. Clumsy attempts to promote alcohol or forbid beards and veils may prove counterproductive, they warn.

Sulayman said around 60 shops and restaurants in the area had complied with the government order, and there were no reports of protests. But in an unrelated incident in neighboring Qinghai province on Friday, an angry crowd of Muslims smashed windows of a supposedly halal store in Xining city, after pork sausages and ham were found in a delivery van.