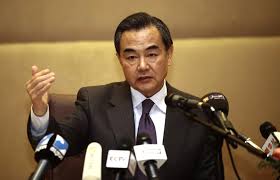 China supports Syria in safeguarding its sovereignty and territorial integrity and opposes “easy interference” in other countries’ internal affairs, the foreign minister said while meeting a top aide to Syria’s president.

Russia last month began striking targets in Syria in a dramatic escalation of foreign involvement in the civil war that has been criticised by the West as an attempt to prop up Syrian President Bashar al-Assad, rather than its purported aim of attacking Islamic State.

Chinese Foreign Minister Wang Yi told Bouthaina Shaaban that China supports anti-terror measures that are in line with international law and have been agreed upon by “the interested country”, according to a ministry statement.

China “opposes the easy interference in other countries’ internal affairs”, Wang added. “At the end of the day Syria’s fate should be decided by the Syrian people.”

More efforts should be made for a political solution, he said. There was no direct mention of either the air strikes or Assad.

China, a low-key diplomatic player in the Middle East despite its dependence on the region for its oil, has repeatedly called for a political resolution and warned that military action cannot end the crisis.